Tomorrow, the BC Civil Liberties Association and OpenMedia.ca will take part in a social media town hall on the subject of spying.

As organizations concerned about privacy, and aware of the expansive scope of government surveillance, people have asked us why we would make use of insecure platforms like twitter or facebook for our conversations. For us, the reasons are simple. 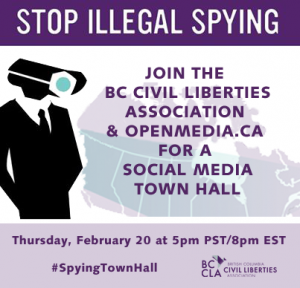 First, Canadians deserve a public conversation about the future of the free and open Internet. Laws being proposed now are changing the face of the Internet, and as democratic citizens we have the right and the duty to take part in decision making about legislation that effects our lives.  Ultra-secretive negotiations like the Trans-Pacific Partnership (TPP), carried on behind closed doors, give the impression that governments want their citizens to stay uninformed, and to stay quiet.  We think that gives us every reason to speak up.

Shouting about this particular agreement has slowed and even stalled the TPP negotiations. Our voices do matter. We can make change. While there may be some irony to it, it is nonetheless essential that those who value privacy must stand up publicly in defence of the principle.

Second, the Internet can have incredible liberatory power. With it, we can organize to oppose threats to our democracy. Canadians mobilized in 2013 to Stop Online Spying, and we can do it again. This is people power in action on a scale— and at a speed—much greater than social justice interests have ever been able to harness before. We’re not ready to give that power up.

Because the online world remains insecure, we caution people to be mindful in how they make use of the Internet. As a result of this insecurity, we know that many people choose not to use social media platforms and we certainly wouldn’t argue with anybody who makes that choice to protect their privacy. But as an organization mandated to fight for liberty and justice, we don’t accept a system in which we must hide and give up connectivity with our communities in order to feel our information still belongs to us.

We believe privacy is relational, and so who gets access to our information matters. BCCLA Policy Director Micheal Vonn gives a talk called “Public Lives: What Eroding Privacy Means for Democracy”( I HIGHLY recommend it if you’re got 90 minutes). In it, she talks about the seeming irony that people engaged in social networking are the very same cyber community effectively organizing against surveillance (in case you missed it, see The Day We Fight Back). What this apparent disconnect actually illustrates is that our old notions of privacy need re-framing. Privacy is actually a social, relational and collective value. Privacy enables social interaction by giving us informational control that is suitable to the social context. We share our mental health records with our doctors, not our first dates.

It is one thing for social network platforms to collect and store our online information. It is another for our government to do so. This excellent video by the New York Times makes the difference between who has access to your information is very clear: “Tech companies may know a lot about you, but they don’t have unilaterally the ability to prosecute you and incarcerate you”. Surveillance, of course, collapses these boundaries.

In the main, [this] is a pretty clear picture of the democratic model turned upside-down.  If citizens are sovereign and we govern ourselves through our representatives, then citizens have freedom and privacy, and government is transparent and accountable to citizens.  At a gallop since 9/11, we have seen this formulation turn around and go in exactly the opposite direction: Citizens increasingly transparent and accountable to government, Government increasingly secret and insulated from accountability to citizens. –Micheal Vonn

Two weeks ago, as part of our Don’t Spy on Me! campaign, the BCCLA filed legal complaints on behalf of a number of community organizations who were being spied on by the Canadian Security Intelligence Service (CSIS) and the Royal Canadian Mounted Police (RCMP). At that time, Grand Chief Stewart Phillip, President of the Union of BC Indian Chiefs, looked into the television cameras and explained what it meant to have the legal activities of the Idle No More movement spied on. He said clearly, “We will not be intimidated”. We agree. We plan to keep using the Internet to organize and to fight back.

Not Without A Fight

We stand for a free Internet and for the principle that individuals and organizations should be able to use the Internet to communicate publicly and privately, without interference or unwarranted surveillance by the government. It’s our position that we must counter threats to our privacy by taking back the Internet, not by hiding from it.

Our rights, our privacy, our information, our Internet, our democracy— we’re not giving them up without a fight.