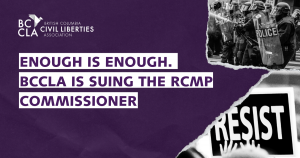 The BCCLA is suing RCMP Commissioner Brenda Lucki for inexcusable delays preventing the release of a civilian watchdog report into RCMP spying on Indigenous and climate advocates.

In February 2014, the BCCLA filed a complaint against the RCMP contending it illegally spied on the democratic activities of organizations and Indigenous nations opposed to the Enbridge Northern Gateway Pipeline project. The complaint further alleged the RCMP improperly shared the information it collected with oil companies and the National Energy Board. The BCCLA argued the RCMP’s secret surveillance created a chilling effect and violated constitutional rights to freedom of expression, freedom of assembly, freedom of association, and privacy.

The BCCLA’s lawsuit claims the RCMP Commissioner has breached her obligations under the RCMP Act and violated the BCCLA’s Charter right to freedom of expression by failing to respond.

The lawsuit will be heard at the Federal Court of Canada, where the BCCLA is represented by Paul Champ of Champ & Associates and Jessica Magonet of the BCCLA.