Last Friday, part of Bill C-24 went into effect, officially creating a two-tier citizenship system. As a result of this new law, dual citizens and people who have immigrated to Canada can have their citizenship taken away while other Canadians cannot. The government’s press release last week tried to justify this discriminatory law by raising the threat of “jihadi terrorism,” but Bill C-24 could easily be used against non-terrorists—for example, a journalist who is convicted of a “terrorism offence” in another country for reporting on human rights violations by the government.

Under this law, the only Canadians who can never lose their citizenship are thos

Currently, citizenship can be taken away mainly on the basis of crimes that are considered threats to Canada’s national security, like terrorism or espionage, or demonstrations of disloyalty to Canada, like treason. But legal experts warn that the list of offences that could lead to the removal of citizenship might be expanded in the future. Additionally, Bill C-24 punishes criminal activity with exile – a practice abandoned hundreds of years ago that has no place in today’s democracy.

The government has created an infographic 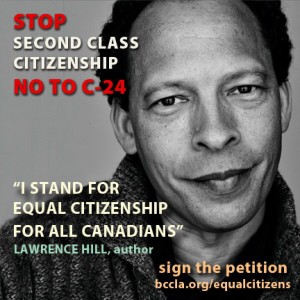 to explain the new citizenship stripping process. There’s one change that really stands out for us in this diagram: the absence of a judge in the new system. The government seems to think that removing the judge improves the process, but we would argue that this makes the process unfair and likely unconstitutional.

Dividing people into different classes that receive different treatment under the law is unfair and un-Canadian. Bill C-24 has turned millions of Canadians into second-class citizens with reduced rights—and as a result, has reduced the value of Canadian citizenship.

We encourage you to share this petition with your friends and family and to let them know about these important changes to the very foundations of citizenship in Canada. Let’s say no to second-class citizenship!

When Bill C-24 was passed last year, we announced our intention to challenge this law in the courts, along with our ally the Canadian Association of Refugee Lawyers. Now that these provisions are in force, we are moving ahead. The BCCLA remains committed to challenging this new law. Be sure to sign up to our list to receive updates on our progress with this court challenge.

Learn more on this topic here:

Update: Due to an overwhelmingly high volume of comments, we have turned off the comment function for this post. However we very much appreciate your feedback, and will take the time to read and respond to the comments we have already received. In the meantime we invite you visit Facebook to engage with us and the BCCLA community on this important topic.

Previous Post: We’re hiring! Outreach and Communications Coordinator
Next Post: All votes are equal, but some votes are more equal than others?