When Bill C-51, the Anti-terrorism Act 2015, was tabled in Parliament this spring, Canada’s leading human rights organizations called for the Bill to be withdrawn. Amnesty International, the British Columbia Civil Liberties Association, the Canadian Civil Liberties Association, the Canadian Muslim Lawyers Association, the International Civil Liberties Monitoring Group, La Ligue des Droits et Libertés and the National Council of Canadian Muslims have stated from the outset that the serious human rights shortcomings in Bill C-51 are so numerous and inseparably interrelated that the Bill should be withdrawn in its entirety. We believe that any national security law reform should instead, first, be convincingly demonstrated to be necessary and should then proceed only in a manner that is wholly consistent with the Canadian Charter of Rights and Freedoms and the country’s international human rights obligations.

Disappointingly, Bill C-51 has passed and is poised to become law. But the fight isn’t over yet. Too much is at stake. Over the past few months, we saw public concern and opposition to Bill C-51 grow as Canadians learned more about the Bill and the threat it poses to fundamental rights and freedoms. Now that it has passed, if we are to see the Anti-terrorism Act 2015 repealed, it is crucial that Canadians continue to have conversations in the months to come about security, human rights, and basic freedoms – with each other and with those seeking office in the fall’s federal election. We believe that the government has never made the case for Bill C-51 beyond the simple assertion that it “needs” additional powers to protect public safety. But it has provided no explanation as to why Canada’s spy agency needs unprecedented and troubling disruption powers.  It has not made a credible case for the vast, opaque and unaccountable all-of-government information sharing regime Bill C-51 creates.  And, it has provided no evidence for how no-fly lists with appeal provisions that lack due process actually improve aviation security and public safety. 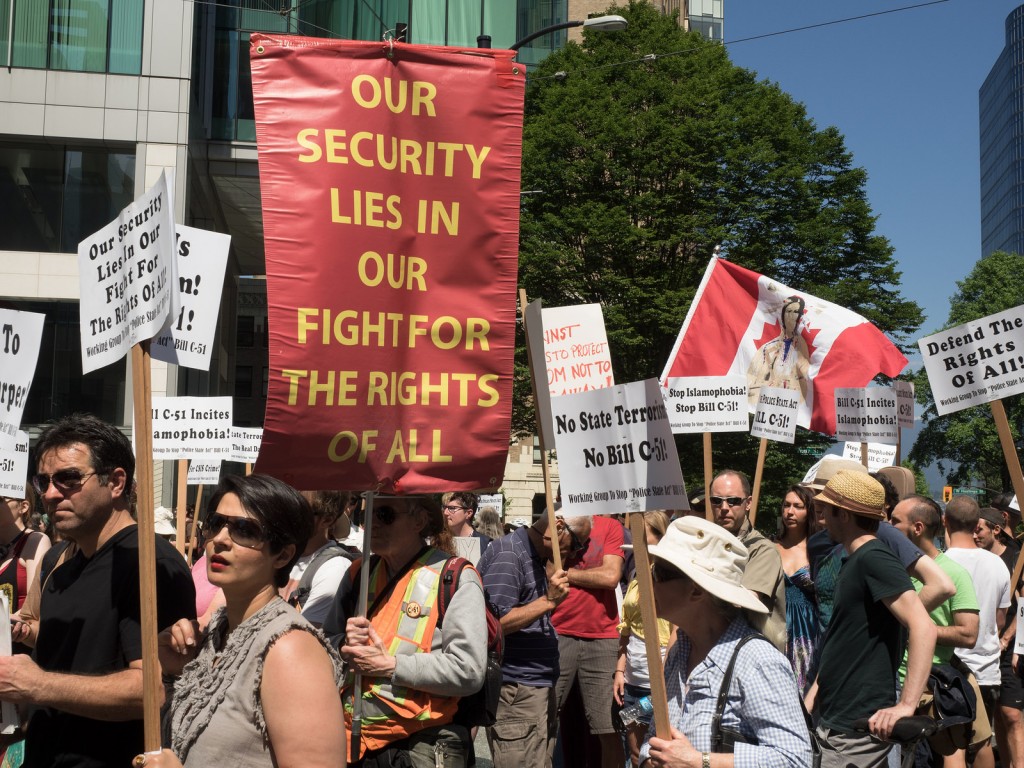 Throughout the Parliamentary hearings on Bill C-51, not a single witness offered a concrete example of how the draconian measures in Bill C-51 would better protect public safety. Legal experts have also pointed out that some provisions in Bill C-51 actually undermine anti-terrorism activities. For example, the new criminal offence of advocating or promoting the commission of terrorism offences “in general” may frustrate detection of potential threats when speech gets driven underground or chill community efforts to de-radicalize extremist views. Yet these serious concerns have not been addressed in any way.

While Canada’s national security agencies are granted ever-increasing powers and scope, no effort has been made to provide for a system of robust and independent accountability, despite urgent calls for reform. For instance, Canada stands stunningly alone among our closest allies in intelligence sharing in failing to ensure parliamentary oversight of national security. And Bill C-51 has only compounded the accountability problems that already exist, by making it harder for individuals to hold government officials to account for rights violations.

With so many unanswered questions and obvious human rights shortcomings, we strongly urge Canadians across the country to keep talking and learning about the Anti-terrorism Act 2015 this summer, and to make it clear to the candidates who will be vying for votes in this fall’s election that they expect nothing less than firm commitments to repeal the Anti-terrorism Act 2015 as a matter of first priority. This debate is far from over.

Previous Post: Updated: Ten Things You Need to Know About the Changes to Canadian Citizenship
Next Post: A tough week for voting rights