A condensed version of this piece first appeared in The Tyee.

At over 60 pages, Bill C-51 – the Anti-Terrorism Act – is both literally and figuratively a heavy read. It proposes a myriad of radical changes to Canadian law and to Canada’s national security apparatus, many of which seriously jeopardize the rights and freedoms of Canadians while promising little improvement to public safety. Lawyers at the BC Civil Liberties Association have gone over the bill paragraph by paragraph, and we’ve outlined the parts of this massive document that concern us most. For a more comprehensive explanation of our concerns, read our Submission to the Standing Committee on Public Safety and National Security. 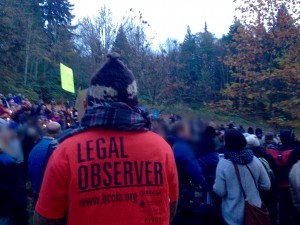 When you think of being secure, you likely think of being safe from physical danger. But Bill C-51 defines security as not only safeguarding public safety, but also preventing interference with various aspects of public life or ‘the economic or financial stability of Canada’. With this definition, a demonstration in favour of Quebec separatism that fails to procure the proper permit, environmentalists obstructing a pipeline route or a peaceful blockade of a logging road by an Indigenous community could all be seen as threats to national security.

2. It gives the government too much discretion to pick and choose which individuals and groups to target for further scrutiny.

Bill C-51 gives the government the ability to designate an extraordinarily broad range of activities as potential security threats. They claim that they will use good judgment when deciding which individuals and groups constitute ‘true’ threats. But this discretionary power just means that whether or not a particular group is seen as a threat may turn on whether their cause is politically popular and in line with the views of the government of the day.

3. It criminalizes speech acts that have no connection to acts of violence.

4. It will severely chill freedom of expression.

It’s unclear even to experts exactly what kinds of speech and protest activity may be considered threats to national security if the bill passes; the average Canadian has little hope of feeling confident that their legitimate political activity hasn’t inadvertently crossed the line. Bill C-51’s expansive language means that Canadians will likely choose not to express themselves even in completely legal ways rather than risk prosecution. Legitimate speech will be chilled, and our democracy will be worse off for it.

5. Canada’s no-fly list would become a secret list compiled with secret evidence, only reviewable through court proceedings that may also be secret.

Protect Program – better known as the no-fly list – is already riddled with problems; Bill C-51 would make it even worse. It would make it illegal for the government or an airline to confirm or deny that an individual is on the list, even to the affected individual. Someone who believes that they may have been listed would not be entitled to access any of the evidence on which their suspected listing was based. If they were successful in initiating a judicial review of the listing decision, the hearings may happen in secret.

6. It will allow government institutions like Health Canada and the Canada Revenue Agency to share information about you with the RCMP.

The proposed Security of Canada Information Sharing Act (part of Bill C-51) would allow government institutions – including non-security-related institutions like Health Canada and the CRA – to share information amongst themselves without a warrant if they believe that the information may be relevant to national security. Given that no one wants to be seen as responsible in case of a security breach, the default will be to share as much information as possible. Massive information sharing does not mean better security. Not only does this jeopardize the privacy of the individuals whose information is being shared, but it may actually make it harder for investigators to detect real security threats: when looking for a needle in a haystack, it hardly helps to add more hay.

7. Canada already has a troubling regime of preventative arrest and detention; Bill C-51 proposes to make it even worse.

Currently the Criminal Code permits the police to arrest, detain and impose restrictions (such as a curfew or travel ban) on someone who has never been (and may never be) charged with a crime if they have good reasons to believe that a terrorist activity will be carried out if these actions aren’t taken. Bill C-51 would lower the threshold for these actions to situations where the police believe that a terrorist activity might be carried out. It also doubles the amount of time an individual can be detained without charge. Innocent people could be arrested and detained on mere suspicion of future dangerousness.

8. It would give CSIS the power to act like a police force, while still allowing it to operate as secretly as an intelligence gathering service.

Bill C-51 would radically redefine the role of CSIS to include the ability to act on – rather than merely to collect – security intelligence. This ignores the lessons of history. The 1960s and 1970s saw serious rights abuses undertaken by the RCMP under its ‘security intelligence’ mandate. CSIS was created in the 1980s for the express purpose of separating Canada’s intelligence agency from its police force. As an intelligence agency, CSIS is permitted to conduct much of its work in secret, and the details of most of its activities are never revealed publically. But that’s precisely why CSIS should not be permitted to also operate as a police force: this secrecy means that rights violations by CSIS are more difficult to detect – and once detected, more difficult to remedy – than if they were the result of actions undertaken by law enforcement agencies.

Previous Post: Human rights protections for trans Canadians: no more delays!
Next Post: “Either you’re with us, or you are with the terrorists”