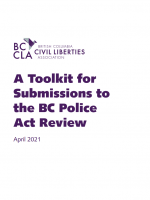 The Police Act governs policing power in the province. The Legislative Assembly of BC has appointed the Special Committee on Reforming the Police Act to examine and make recommendations on reforms related to policing under the Police Act. We need your help to get our voices heard.

In the last year, how many stories did you encounter in the news that were about police or policing? Police are one of the most powerful institutions in our society. They conduct armed wellness checks that can be fatal on people experiencing mental health distress. Police patrol schools and public transit. They profile and street check Black and Indigenous communities, and harass homeless people who live in public space. They arrest Indigenous land defenders in militarized policing operations.

We must question this power. Join us to demand a radical transformation of policing.

The Special Committee on Reforming the Police Act are now accepting written, audio or video submissions from the public on changes you want to see. The deadline is April 30, 2021 at 5 pm PST. We invite you to make your own submission, if you are comfortable doing so. Your submission is considered a public document so do not include any confidential information in your submission.

While the Special Committee can only make non-binding recommendations to the Legislative Assembly, this is one of the ways we can join our collective voices. Did you know that one in five interactions with police in BC involves someone with a mental health or substance use issue? This must change. From six decades of work, we have found that policing has been resistant to meaningful reform. We cannot get stuck on the ineffective hamster wheel of more technological fixes, like police-worn body cameras, or more funding for diversity hiring or training. We must push for a radical transformation of the scale and scope of policing power.

If you would like to read BCCLA’s oral submission, you can do so here.

Here are some of the key points we made that you can consider in crafting your submission:

1. The Province must work with Indigenous peoples in BC to align the Police Act with the United Nations Declaration on the Rights of Indigenous Peoples.

The history of policing has always been intertwined with colonialism. The North-West Mounted Police was established in 1873 to displace and contain Indigenous peoples onto reserves, to enforce the extra-legal pass system, to punish the practice of Indigenous cultures and ceremonies, and to force Indigenous children into residential schools.

Any investigation into reforming policing must contend with policing as a pillar of settler-colonialism. This includes obtaining free, prior and informed consent from each Indigenous Nation before subjecting them to municipal police forces or the RCMP in BC, and not withdrawing provincial program and service funding for any Indigenous Nation who does not consent to such colonial policing.

A street check is a discretionary, racist and illegal police practice. Data over ten years, from every municipal force in BC, shows that Indigenous and Black people are over-represented in and harmed by street checks. Street checks are not legally authorized by statute or at common law.

Over 8,993 people and 92 organizations, including Hogan’s Alley Society, Black Lives Matter, Union of BC Indian Chiefs, WISH Drop-In Centre Society, and the BC Civil Liberties Association have been demanding a ban on all police street checks in BC.

BC has the shameful honour of the country’s highest rate of police-involved deaths. Growing proportions of government budgets go into policing, with no legislated audits or evaluation. There is actually very little independent evidence that policing in BC works and, in fact, reams of evidence suggest the opposite. Anti-violence organizations, mental health experts, and youth groups have all pointed out that police officers are not trained in supporting people in crisis. In fact, it is often the opposite: police officers often wrongfully arrest survivors of domestic violence or escalate a situation where someone is in crisis.

Police are almost universally mistrusted by Indigenous, Black, racialized, migrant, undocumented, sex worker, drug user, and homeless communities. Across the country, Indigenous and Black people are disproportionately killed by police. Furthermore, 68 percent of people killed in police encounters were impacted by mental illness or substance use.

The Police Act must be amended to limit the scale and scope of policing power. Policing resources must be re-directed to non-policing community-based services and upstream safety solutions.

While many of these laws are federal, the Police Act must be amended to set provincial guidelines of non-enforcement and policing forces must be directed to not use municipal or provincial resources toward enforcement of these social issues.

5. Moratorium on Police Use of Force and Surveillance Technology

We are witnessing the unfettered increase in the militarization of policing, as well as the rapidly expanding terrain of policing technologies.

The Police Act must place stricter limits on the use of weapons, including the use of police dogs and tasers. The use of full-body restraint devices and tear gas must be banned. In addition, the province must also implement a no-carry policy in Indigenous, Black and low-income communities, aimed toward disarming the police in vulnerable communities. Finally, we need an immediate moratorium on law enforcement agencies’ use of facial recognition and algorithmic policing technology.

Police accountability and governance mechanisms lack public trust, are ineffective, and are an appendage—rather than counter—to policing systems. The vast majority of independent investigators staffing policing oversight bodies in Canada are white men who are former police officers. We need a massive overhaul that ensures publicly funded access to justice to fully civilian, transparent, and independent oversights bodies that can make binding orders upon police officers. Similarly, police governance through municipal police boards in BC must be locally and democratically controlled with accountability to communities impacted by police violence. Indigenous nations must have jurisdiction, authority, and conceptions of justice centered in all civilian police board governance and oversight bodies.

If you would like to read BCCLA’s oral submission to the Special Committee on Reforming the Police Act in full, you can do so here. 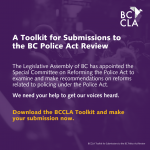 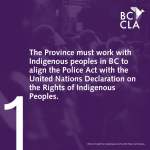 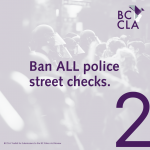 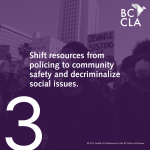 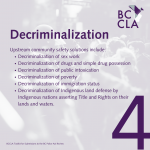 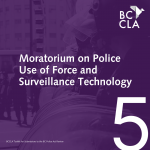 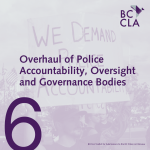 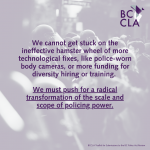