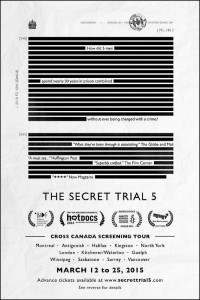 Carmen K. M. Cheung, Senior Counsel at the BC Civil Liberties Association and the filmmakers of The Secret Trial 5 will engage in a panel discussion following a screening of the celebrated documentary film.

There are two screenings of the film: March 24th at Kwantlen Polytechnic University and March 25th at the Vancity Theatre in Vancouver. Carmen will engage in a discussion, alongside filmmakers, after both screenings. You are invited to engage in the “hybrid cinema” experience by sharing your thoughts through Twitter during and after the screening with the hashtag: #St5film.

The March 24th screening is at Kwantlen Polytechnic University in Surrey, BC from 7-9 pm; this is a free student screening. For more details please visit the event’s Facebook page.