Take a walk through our history

Click on the image below to view a prezi presentation on 50 years of the BCCLA’s history! 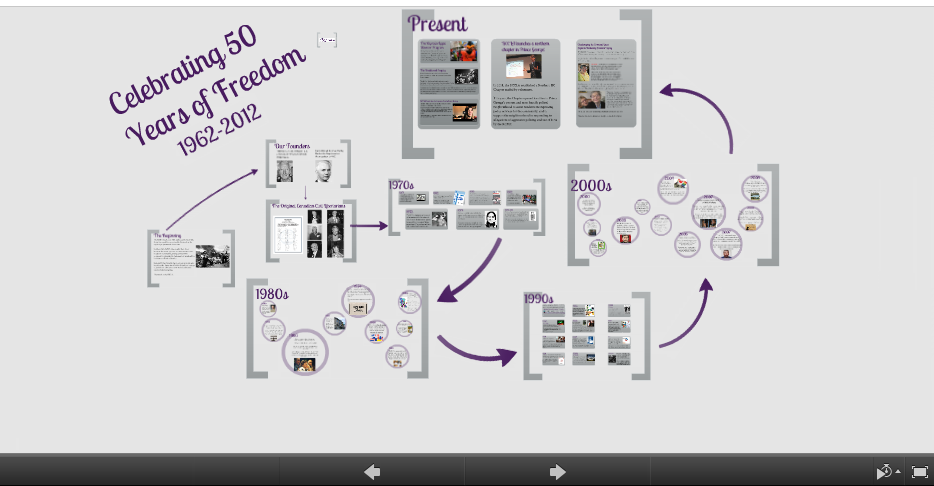 Civil liberties advocates and the origins of the BCCLA

The birth of the British Columbia Civil Liberties Association (BCCLA) in 1962 was a watershed moment in the Canadian human rights movement. Most of the civil liberties associations born in the thirties and forties were defunct by the late 1950s, and a new coterie of civil liberties groups emerged in the sixties beginning with the BCCLA.

The BCCLA was born amidst a controversy with disturbing parallels to current public debates about the rights of terrorists. Although the Sons of Freedom was only a small religious sect that rejected materialism and sought to ‘encourage’ their Doukhobour brethren to avoid the trappings of modern society, their activities labelled them terrorists in the eyes of many British Columbians. Between 1923 and 1962, the Sons of Freedom’s encouragement took the form of over 1100 arsons and bombings, nude parades and burning symbols of materialism.

On 24 March 1962, 150 RCMP officers (out of a total of 700 stationed in the province) raided the town of Krestova (Kootenay region) to arrest 57 members of the Fraternal Council of the Sons of Freedom and charged them with conspiracy to intimidate the Parliament of Canada and the Legislature of British Columbia. Outraged by the charge, which was clearly excessive and in no way reflected the true nature of the danger posed by the Freedomites, a group of individuals came together at the University of British Columbia to create an organization to raise funds for the Freedomites’ defence and advocate for human rights in British Columbia. Thus was born the BCCLA.

The BCCLA’s first president was a Vancouver Unitarian minister, Philip Hewett, who was soon replaced by James Foulks, the founding head of the Department of Pharmacology at the University of British Columbia. The BCCLA has proven to be one of the most dynamic rights associations in the country. Between 1968 and 1973 the association fought a string of battles against censorship in Vancouver, including attempts by the city licensing inspector to shut down various local theatre productions, and attacks on the Georgia Straight (a popular alternative paper founded in 1967) for obscenity. It successfully lobbied Vancouver City Council to limit the licensing inspector’s powers and, in several Georgia Straight obscenity cases, provided legal counsel and experts to testify on the literary merit of the paper’s work.

In 1971, when police on horseback caused a riot by storming a crowd of youths in Gastown who were protesting drug laws, the BCCLA took centre stage in defending the rights of the protestors against police abuse. Years later, in 1979, the association succeeded in convincing a provincial Supreme Court judge to strike down the provincial Heroin Treatment Act, which was designed to forcibly detain drug addicts and to compel them to seek treatment. The court decision provided an important moral victory for civil libertarians opposed to the state’s forcing individuals to be treated for addiction. Although the decision was overturned in the Supreme Court of Canada, the case reflected the rising prominence of the BCCLA and its ability to mobilize sufficient resources for a court case of national importance. Among the more notably figures involved in the BCCLA during these years was Bill Deverall, Normal Levi, Harry Rankin, David Suzuki and Hugh Keenleyside.

A key figure in the association’s early history was Reg Robson, a sociology professor at the University of British Columbia whose major publications focussed on the effectiveness of alcohol treatment centres. One of the founders of the association, Robson sat on the Board of Directors until at least 1982 and served in various executive positions including executive secretary (1969-1972, 1978), president (1972-5, 1980-2) and treasurer (1975, 1979). No member was more dedicated than Robson, who served in these various capacities when no one else was available and helped to ensure the viability and institutional memory of the association.

It was Robson who would fight with the Canadian Civil Liberties Association over their differing visions of what a national civil liberties association should be and pushed for the creation of a national organization independent from the Canadian Civil Liberties Association (of which the BCCLA has never been affiliated with, even today). Robson took the lead in doing media interviews on behalf of the BCCLA during the October Crisis of 1970, he oversaw the creation of new rights associations across British Columbia, and would be a key player in the association’s most active campaigns, including its reaction to the Gastown riot and challenging the Heroin Treatment Act. It was thanks to his dedication and perseverance that the association thrived and became an effective rights advocate provincially and nationally.