I have always admired resilience. Toughness. The capacity to recover from difficulties.

I first learned about resilience from other children. Growing up surrounded by violence, resilience meant having a tough shell. Unable to protect our physical bodies, we protected our inner selves by creating barriers to the realities surrounding us. We disconnected from the hostile world in order to establish a sense of safety when we couldn’t be safe.

When I first met Amanda Lepine, I quickly recognized her resilience. Amanda got in touch with me at BCCLA when she decided to share her experiences as part of the recent solitary confinement trial.

Amanda was first incarcerated at age 12. She has spent the majority of her life surrounded by violence. Incarcerated today, Amanda has every reason to maintain an impenetrable barrier between her inner self and her external reality.

Still, she chose to speak.

As I sat in the courtroom listening to Amanda describe some of the most discriminatory and damaging aspects of Canada’s prison system, I was in awe of her resiliency. Somehow, through all the pain she has endured, Amanda has maintained her core sense of self. And, somehow, she was willing to share that self with us in the courtroom. 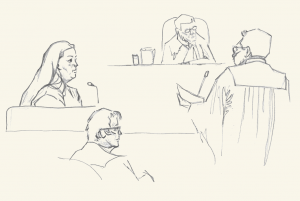 Amanda Lepine gives testimony at the BC Supreme Court of her experiences in solitary confinement. (By Catherine Hart)

She was an immovable truth. Her voice was steady, her demeanor calm. She spoke about being held in solitary confinement for weeks on end because she wouldn’t take responsibility for something the correctional officers acknowledged she didn’t do. She spoke about her painful childhood and forced separation from her grandparents. She described being locked down in a unit for 8 days with a group of women who were denied food, toilet paper, and basic feminine hygiene products. She spoke of reports from her youth following her 20 years later and being used to justify increased prison security ratings. She spoke of her experiences as a Métis woman – experiences of cultural disrespect, and discrimination on the basis of her sexual orientation.

As I watched Amanda speak, I saw her straddling worlds and translating between them. Prison/public. Internal/external. I saw her courageously speaking from a place of deep vulnerability. I saw her resilience as elasticity – the ability to spring back into one’s own shape despite significant, prolonged oppressive forces.

Amanda’s story isn’t told by what has been done to her. She writes it every day with resilience, bravery, and compassion.

Amanda has joined others leading the call to end the harmful solitary confinement practices taking place in Canadian prisons. Canada is trying to take away the legal victory that Amanda’s leadership helped achieve.

Help us fight this appeal to end indefinite solitary confinement once and for all by donating now.

Get updates on our work to end solitary confinement

Donate Now!
The BC Civil Liberties Association is funded by the Law Foundation of British Columbia and individuals who believe in what we do. To support the BCCLA, visit www.bccla.org