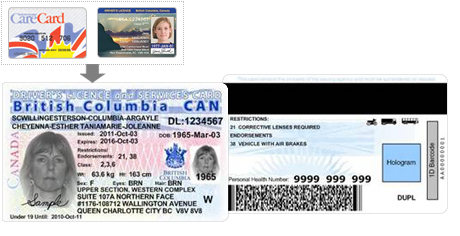 This year-long project has researched the policy environment and privacy implications associated with the BC Services Card. The card, which replaces the “outdated” health CareCard, proposes to join the driver’s license and health care card into one super smart ID card. That is just the beginning for the mandatory, computer-chipped card, which will add more government services in the future and potentially serve as a “master key” to the highly sensitive personal information of British Columbians.

There are a number of civil liberties issues that arise with the province’s “Gov 2.0” strategy, which seeks to download government services to an online delivery model based on linking discrete databases of personal information across government sectors and jurisdictions, and even with the private sector. Gov 2.0 involves a radical restructuring of BC’s identity management framework, in which citizens have little, if any, opportunity to control their personal information nor consent to how it is used. As such, it bears careful consideration. To date, however, the government has not consulted with the public. In fact, it provided little information about the BC Services Card program until six weeks before its launch in February 2013.

Funded by the Privacy Commissioner of Canada and headed by Dr. Kate Milberry, this research project assessed the impact of the BC Services Card on data protection and identity integrity not only in the province, but in Canada generally. The research explored the influence of the private sector—in particular vendors associated with the payment card industry. What it found was a close relationship between the provincial government and the main vendor—an identity credential broker that provides the same services to the federal government. This raises valid questions about the direction of identity policy in British Columbia, and what interests it serves: corporate, technocratic, administrative. What is clear is that the identity system currently being deployed in the province is not citizen-centric and comes with considerable potential risk for privacy, identity integrity and security of personal information.

This research encountered considerable difficulty obtaining information about the BC Services Card from the government. Requests for interviews with key government officials responsible for the card were mostly ignored or denied. This was surprising, as the card is a large identity management project that marries two major public services, integrating their respective databases. The dearth of publicly available information forced researchers, in conjunction with BC Freedom of Information and Privacy Association, to file numerous freedom of information requests. The government has returned with no responsive records, fees in the thousands of dollars and extension requests. In the case of the Ministry of Health, there has been nothing but silence. MoH failed to respond to the first FOI request, filed in 2011 by FIPA. When FIPA complained to the Information and Privacy Commissioner of BC for deemed refusal, MoH responded (just two days before the hearing) with a blanket refusal of the request, invoking exemption under the Freedom of Information and Protection of Privacy Act. One day later they added cabinet confidences to the list of exemptions. A later request to MoH was forwarded to the Ministry of Citizen Services and Open Government.

This is appears to be part of a general trend whereby governments are becoming less transparent to citizens. Research from FIPA found that non-responsive rates to FOI requests have nearly doubled over the past decade; non-responsive rates for media have increased by approximately 200%; and interest group non-responsive rates have risen by approximately 50%. In her 2010 report on timeliness of FOI responses, Privacy and Information Commissioner Elizabeth Denham wondered if the government was “…simply denying access or determining there were no responsive records to their requests.” (source) In March, 2013, we received a large, but redacted response from Citizen Services. We are still awaiting a response from ICBC to a request filed in September, 2012, which has long passed the legal requirement for response. Below is all the information we have received to date: 600 heavily redacted documents from ICBC that cover the early planning stages of the BC Services Card and 350 pages from the Ministry of Citizen Services.

BC’s Information and Privacy Commissioner Elizabeth Denham has called for “fulsome” public consultation before the BC Services Card enters into Phase II, when the card’s computer chip will be activated. In her review of the card, completed just one week before its launch, she wrote: “I remain deeply concerned that the public has not been consulted about the BC Services Card program as a whole. Given the program’s profound reach and the amount and type of personal information involved, it is critical that citizens are included in the dialogue.”

The BC Government has agreed with all of Commissioner Denham’s recommendations, so it seems British Columbians can finally expect to be consulted on the way the government accesses, shares and stories their personal information. Join us April 26 for a public workshop to discuss the very important issues associated with the BC Services Card, and to pick up a copy of the final research report.

The BC Services Card: A National ID Card by Stealth? Privacy Workshop video

The BC Services Card: Drivers, Architectures, and Risks

Vincent Gogolek’s report on the project in the Huffington Post

Biometrics and the BC Services Card

The BC Services Card and Confused Public Outreach

Smart Chip, Simple Illusions: NFC and the BC Services Card

5 thoughts on “A National ID Card by Stealth? The BC Services Card”