Take Action Menu
What are your rights?

The Canadian Charter of Rights and Freedoms[1] (the “Charter”) guarantees legal rights for persons charged with an offence. Section 7 of the Charter states:

“Everyone has the right to life, liberty and security of the person and the right not to be deprived thereof except in accordance with the principles of fundamental justice.”

When a person is arrested and charged with a criminal offence, their right to liberty is interfered with by the state. The state can only interfere with a person’s liberty rights in accordance with the principles of fundamental justice. These principles are based in the fundamental tenants of our justice system[2], such as the right to silence and the right to be presumed innocent until proven guilty.

(d) to be presumed innocent until proven guilty according to law in a fair and public hearing by an independent and impartial tribunal; and

(e) not to be denied reasonable bail without just cause. 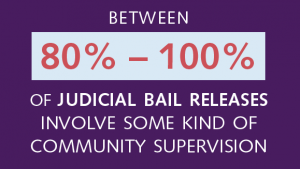 Sections 11 (d) and (e) work together to guarantee that a person accused of an offence be released into the community on bail unless the Crown prosecutor can justify detaining the accused. Plus, the bail conditions must be reasonable. Yet, despite these constitutional guarantees, there is evidence that accused people are not always granted their rights.

What is pre-trial release?

A person arrested and charged with an offence may not go to trial for weeks or months after their arrest. During that time, the accused is either released into the community or held in custody to await trial. Release into the community is known as “pre-trial release” or “bail”. Pre-trial release may be granted by a police officer on arrest or by a justice or judge at a hearing following an arrest.

Pre-trial release by a police officer

After a person is arrested for an offence, a police officer can either release the accused with conditions or hold the accused in custody to appear before a justice or judge within 24 hours. If the accused is released, the officer may require that the accused sign an undertaking (i.e. Form 11.1).[1] An undertaking, sometimes called “A Promise to Appear”, is a written promise given by an accused person to appear in court at a stated time and place. An undertaking may also include a promise to comply with other conditions.

[1] Criminal Code, ibid, Schedule [to Part XXVII], Form 11.1: Undertaking Given to a Peace Officer or Officer in Charge.

Pre-trial release by a justice or judge

When a person charged with an offence[1] is taken before a justice or judge (within 24 hours of arrest), the justice or judge must order that the accused be released onan undertaking or bail with or without conditions unless the prosecutor shows cause why the detention of the accused in custody is justified.[2]

Bail cannot be denied unless there is a “substantial likelihood” that the accused will commit a criminal offence while on bail or will interfere with the administration of justice.[3] If the accused is released on bail, conditions can include:

If the accused refuses to agree to the bail conditions, they will be held in custody to await trial.

What is the impact of conditions of pre-trial release on persons charged with offences?

While on pre-trial release or bail, an accused with unreasonable conditions may receive many charges for failures to comply. One study showed that, “even when the original charge is withdrawn or dismissed, the Crown will frequently still pursue a conviction for charges of failure to comply with a bail order.”[2] Another study found that, “[I]n 75% of cases,[administration of justice offences] were the most serious offences involved in the incident.”[3] What these studies demonstrate is that the courts and the criminal justice system are overridden by administration of justice offences. As one “Legal Actor” put it in one of the studies:

“I have seen most stuff coming through these courts these days being failing to comply and breaches, and I don’t understand. Where did all the real criminals go? Why isn’t everybody charged with new offences? Because most of what we see on a day to day basis anymore are failures to comply and breaches.”[4] 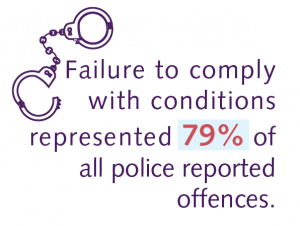 It is important to note that the activities that become criminalized in the context of pre-trial conditions – having a drink of alcohol or being outside your home after 6:00 p.m., etc. –  would otherwise be legal.

Many accused agree to conditions without question because the alternative is being held in custody for weeks or months to await trial. This means that accused people frequently agree to conditions that are highly restrictive or unrelated to their original charge.

“Accused will agree to almost anything to avoid returning to detention. Lengthy waits in custody for bail hearings may exacerbate this pressure.”[6]

Spending any amount of time in jail, even overnight, can be dangerous and have serious repercussions for an accused personal life.

“Even a few days in detention can mean emergency child care arrangements, lost income, a lost job or skipped medication.”[7]

While the impact of being held in custody may seriously impact a person’s life, unreasonable conditions of pre-trial release may be equally impactful, especially for marginalized people.

Spatial conditions (or “red zones”) are areas where an accused may not enter. Generally, red zones are selected based on where the alleged offence took place. Spatial conditions may isolate the accused from their social support systems, including their homes, their families, and essential social services. For many marginalized people, red zones can prevent access to essential services. In accessing these services, accused run the risk of re-arrest and addition charges for failure to comply with conditions.

“Red zones force [those on supervision] to choose between compliance with order and meeting basic health safety needs when the red zone cuts them off from accessing the services and community connections that they rely upon.”[1]

In Pivot Legal Society’s Full Report: Project Inclusion, one of the participants, relayed her experience with red zones:

“It didn’t make sense, my bank was there, my home was there, my probation was there, my doctor was there, like come on guys! All of Hastings Street? Hello! My whole life is there! They’re going to arrest you every time you want to go home?”[2] – Lisa

Impact of conditions on addiction

“The court will give you a red zone so you can’t come into this area. But I’m an addict. They sell drugs in that area. So in order for me to get drugs, I have to go to that area. So even if the court tells me not to I still go.”  – Samuel [1]

Impact of Conditions on Indigenous people

While there is some research on the disproportionate impact of conditions of pre-trial release on marginalized people in urban areas, generally, there is little research on that impact on Indigenous people in rural and remote communities. This is the population we will focus on with the Conditions Project.

We know that Indigenous people are significantly over-represented in the rates of incarceration across Canada. We suspect that this over-representation can be traced back to unreasonable conditions of pre-trial release, where Indigenous accused are caught in the “revolving door” of the criminal justice system for failure to comply with these conditions.

In the landmark case of R v. Gladue, the Supreme Court of Canada traces the over-representation of Indigenous people in prison back to the systemic discrimination that results in poverty and substance use. The Court also notes that Indigenous accused are more likely than non-Indigenous accused to be denied bail:

The research conducted on the impact of conditions of pre-trial release on Indigenous people demonstrates that accused face barriers with respect to bail. Because some bail orders require a person to post a bond, some Indigenous accused are not able to be released on bail:

“On Aboriginal reserves, few, if any, community members own property. This can be problematic as bail orders generally have a financial component.”[2]

In addition, court resources for remote communities are limited. Accused awaiting a bail hearing may be flown into another jurisdiction, which can take longer than those who have bail courts readily available in their community:

“For accused from remote communities, time in custody may be longer as it may take up to a week to be transported to the nearest provincial detention centre.”[3]

Based on the limited research available, it is clear that the question of whether conditions of pre-trial release disproportionately impact Indigenous people needs to be addressed.