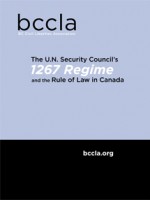 The United Nations Consolidated List is the product of an anti-terrorism sanctions regime established by the United Nations Security Council in 1999. First established to target the activities of the Taliban, this sanctions regime – also known as the 1267 Regime – was expanded to target al Qaeda and Osama bin Laden after the attack on the USS Cole. As further detailed below, individuals and entities on the Consolidated List (or the “1267 List”) are subjected to restrictions such as international travel bans, asset freezes, and arms embargoes. The due process protections for individuals and entities finding themselves on the 1267 List are minimal – there is, for example, no recourse to judicial review of the United Nations’ decision to list, or its refusal to delist. There is, for another example, no requirement that the full reasons for listing ever be disclosed to the individuals or entities placed on the list. There is no right to know the identity of the state seeking the listing. The paucity of information provided to those listed stands in stark contrast to the burdens placed on them as a result of their listing.

The full report can be read here