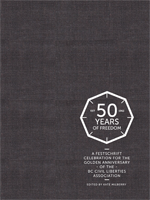 As we approached our 50th anniversary, the Board of the BC Civil Liberties Association decided to endorse a project of inviting contributions to a Festschrift in honor of the association and its work. This edited collection is the result. A Festschrift is a collection of essays and other writings published so as to recognize and celebrate the work of someone. Usually that someone is a notable academic, author or public figure. But here, we do this for an organization. Usually, such an anthology is published on the occasion of someone’s retirement. But here, we do so simply to mark the passing of half a
century. The work of the BCCLA will continue as long as there are principled individuals, interested in and committed to civil liberties prepared to devote their time to it.

50 Years of Freedom: A Festschrift Celebration for the Golden Anniversary of the BCCLA