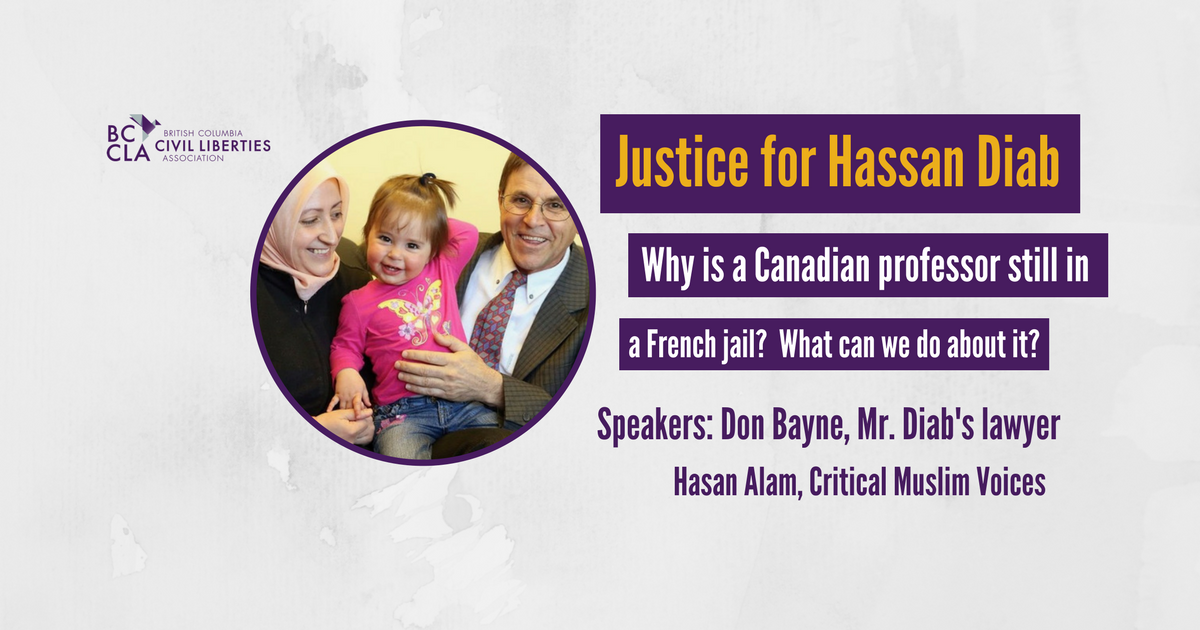 Justice for Hassan Diab: Why has a Canadian professor been abandoned in a French jail and what can we do about it?

Note: No ticket required. This is a free and public event. However, RSVPs are requested for event logistics and preparation.

Hassan Diab, a sociology professor at the University of Ottawa, was arrested in 2008 in connection with the deadly bombing of a Paris synagogue that occurred 28 years prior in 1980.

After 6 years of imprisonment and house arrest in Canada, Mr. Diab was extradited to France in 2014. Because of France’s documented history of using torture evidence in anti-terrorism investigations and trials, human rights and civil liberties groups–including the BCCLA–opposed the unconditional extradition given concerns that if delivered to France, Dr. Diab–a Canadian citizen–may face trial based on evidence potentially derived from torture.

The Canadian judge who extradited Hassan Diab described the French case as “weak” and concluded that a conviction was unlikely if tried in a Canadian court. France’s new anti-terrorism laws permit courts to rely on secret “intelligence,” whose contents or sources have never been disclosed to Mr. Diab.

Since his jailing, French investigative judges recommended that he be released on bail, saying there was reliable evidence that he was not in Paris at the time of the bombing.  An appeal panel over-turned these recommendations saying that Diab’s release would be a ” threat” to “public order”.

It has now been more than two years that Mr. Diab has been held in pre-trial detention in France. We are calling on the Government of Canada to raise Mr. Diab’s case with the French authorities. We have the gravest concern that this case represents a profound miscarriage of justice and the time to act is long overdue.

Read BCCLA blog by Carmen Cheung, “The stuff of hope and trust – resisting the use of evidence derived from torture”.

Note: No ticket required. This is a free and public event. However, RSVPs are requested for event logistics and preparation.