Register here for your workshops: 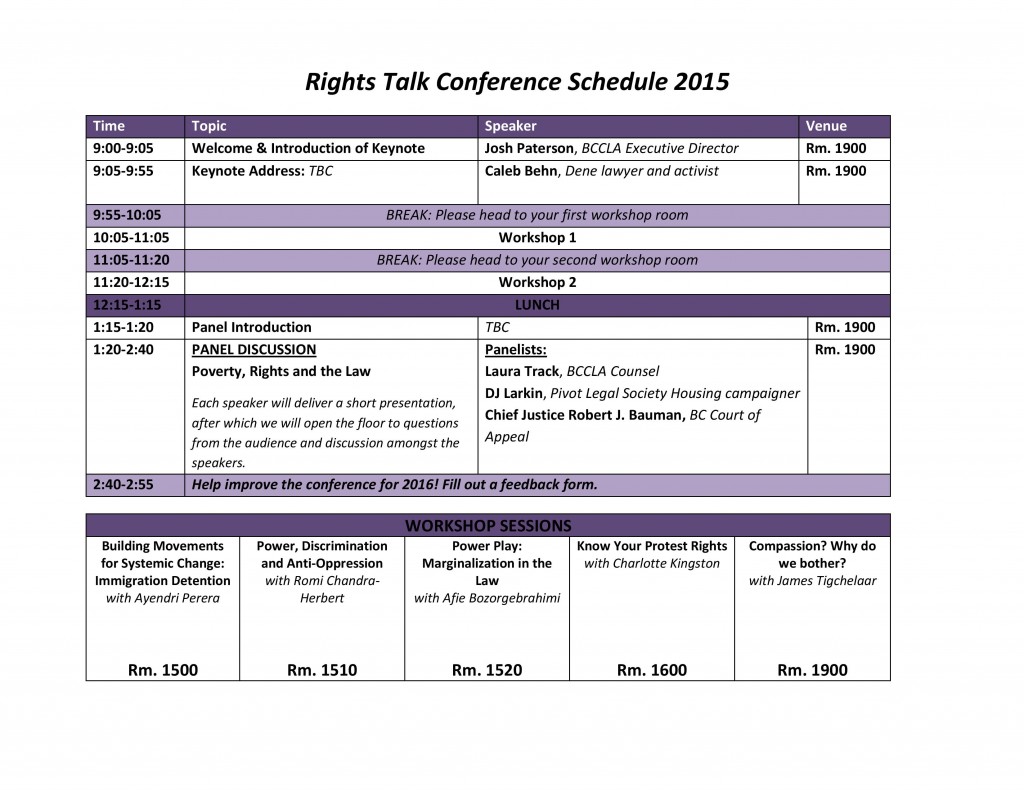 Panel description: Poverty and economic inequality are major issues in Canada, including significant homelessness and food insecurity. Many individuals, community groups, non-profit organizations and politicians are concerned about these issues, and are trying to address them in a variety of ways. The law can be a powerful tool for social change – think of the legalization of same-sex marriage or the overturning of Canada’s prohibition against physician-assisted dying – but there are some unique questions that are raised when we think of the law as a potential tool to combat poverty. Our panelists will unpack some of these unique questions for us today!

Bio: Laura is a lawyer with the BC Civil Liberties Association. On behalf of the BCCLA, Laura is directing litigation challenging the use of solitary confinement in Canadian prisons, second-class citizenship, and many other issues. She completed her law degree at UBC and a Masters degree at Oxford, where she focused her research on economic and social rights. She has a keen interest in how the law can be used to fight poverty and advance economic and social rights like the right to housing, food and health.

Bio: DJ is a lawyer and campaigner for housing justice with Pivot Legal Society. Pivot is a human rights organization that uses the law to address the root causes of poverty and social exclusion in Canada. That work is grounded in Vancouver’s Downtown Eastside, where so many people experience the negative impacts of marginalization. Pivot challenges the laws and policies that force people to the margins of society and keep them there. Over the past decade, they’ve won major victories for sex workers’ rights, police accountability, health and drug policy, and affordable housing. DJ’s work focuses largely on the criminalization of homelessness. She works with her clients to challenge laws that displace people, change systems of housing that infringe on the human rights of low-income renters, and fights housing policies and practices that put marginalized tenants at risk. She is committed to working with her clients to create a community that respects and values all of its members.

The BCCLA believes that protest is a critical part of free expression and assembly rights. We aim to make sure people are informed of their rights and safe when they do so. This workshop includes information on laws related to protest, expression, and assembly, and tips for exercising those rights in safe and legal ways.

Bio: Charlotte joined the BCCLA while completing her MA in Political Science at UBC. She has worked as a facilitation trainer for youth and community groups, and for several post-secondary student organizations promoting access to education.  She is passionate about creating opportunities for democratic dialogue between all segments of Canadian society, and engaging community members in important conversations about public policy.

2. Power Play: Marginalization in the Law

In this session, we use games and activities to facilitate discussions about power, discrimination and equality. It serves as a brief introduction to equality law in Canada, introducing the Charter of Rights and Freedoms and looking at some of the cases where it has been used. If you are interested in social change and how the law can be used to further it, don’t miss this session! Brought to you by the Women’s Legal Education and Action Fund.

Bio: Afie is currently a geography student at UBC, specializing in environment & sustainability. Her studies sparked her interest in social and ecocnomic sustainability, and the huge role that equality plays in this. Afie’s social justice passions lie especially in anti-racism, decolonization, and of course all things gender. When she’s not in class, locked in the library, or doing workshops, you can find her shouting her love for salt and vinegar chips and used-book stores from the rooftops.

Using immigration detention as a case study, we will unpack the systems that perpetuate this issue and then discuss some of the tactics that create effective movements towards social justice.

Ayendri is a Sri Lankan born and Vancouver based activist, facilitator and youth organizer. She is passionate about intersectional social movements and has been active in organizing centered in anti-oppression, decolonization and environmental justice. In the past Ayendri was a committed organizer with the End Immigration Detention Campaign in Ontario and is currently organizing with No One Is Illegal Vancouver.

Want to talk about what we mean by the words we toss around when speaking about diversity? Romi’s workshop will address the big picture topics that structure our relationships to schools, friends and communities and broaden perspectives about accessibility, inclusion, power and privilege.

Bio: Romi is in good company amongst the diverse South Asian diaspora in Canada. Seeking refuge from multiple coups in Fiji (which still continue to this day), he and his family fled in 1989 to find a new home. As a result, social justice practices and community mobilizing became central to his day to day life. In 1997, he helped establish the very first Gay/Straight Alliance in BC at his high school in Maple Ridge. Over the past 16 years, Romi has had the honour of working and learning with diverse communities across the province and internationally. He was worked as a youth worker for queer and immigrant and refugee communities, both at a grassroots level and within established institutions. Romi finds his strength in helping others to help themselves.

5. Compassion: Why Do We Bother?

People from socially disadvantaged places are more likely to contract HIV, live with addictions, and die prematurely than the socially advantaged. How do we respond to this as individuals and as a society? What challenges does this present in providing health care in these areas? Is it human nature to be caring, or are we more likely to abandon those who can’t ‘make it’ to suffer? In this work­shop we will examine the tension between selfishness and caring, and try to work out how to respond.

Bio: James is an educator with the BC Centre for Disease Control. He worked with the Outreach Program (Street Nurse Program) since 1991, first as a front line nurse, then as the clinical/outreach supervisor, and then as the Outreach Education Leader. Much of James’ current work in education involves working with students in the health professions, as well as nurses and other health and social service providers to address the challenges related to providing effective and accessible care to people who are most vulnerable to STI, Hepatitis and HIV.