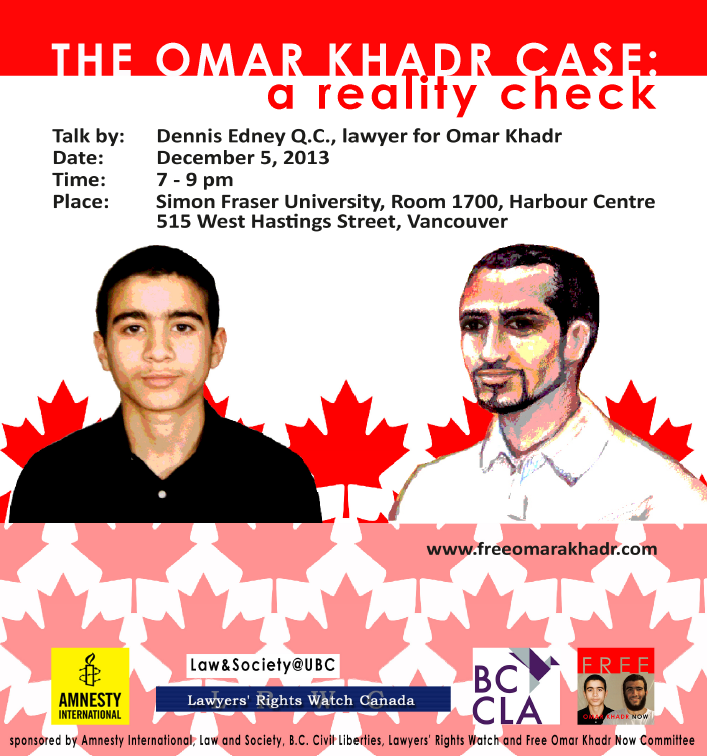 Dennis Edney Q.C. will explain the facts and law behind plans to challenge the Guantánamo Bay ‘conviction’ of Omar Khadr before military and civil courts in the U.S. In October 2010. Omar Khadr accepted a get-out-of-jail plea bargain offered by the U.S. after 8 years of illegal imprisonment, torture and other prohibited treatment, and denial of due process.

Lawyer Dennis Edney will discuss facts and law ignored by the Guantánamo Bay Military Commission. He will explain why the convictions must be overturned because the charges were not pre-existing crimes but were made up after Omar Khadr’s arrest as was the “unlawful enemy combatant” designation. He will also explain why Omar should have been treated as a child.

Dennis Edney Q.C.is a well known defence lawyer based in Edmonton who has acted pro bono for Omar Khadr since 2005. He has appeared at all level of courts on Omar Khadr’s behalf including the Supreme Court of Canada and the U.S. Supreme Court. Edney has received a number of awards for his legal work and is a Bencher of the Law Society of Alberta.