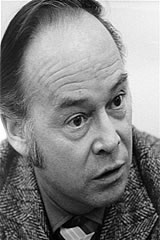 I was sometimes asked in quiet asides at national meetings on civil liberties matters whether Robson Street in Vancouver was named after Reg. This tells you quite a bit about Reg. Streets are named after the builders of communities, people with the unswerving tenacity and intelligence to put their vision into effect. Reg was that sort of person. When he joined the board of the B.C. Civil Liberties Association in the mid-’60s, he took over the operation of a fledgling paper tiger and turned it into one of the main voices for civil liberties and human rights in the country.

From the mid-60′s to the mid-80′s, he was the BCCLA’s main spokesperson, lobbyist, and organizational leader. He made a hundred or more media appearances every year, met with chiefs of police, government ministers, bureaucrats, appeared before commissions, led board, executive, and finance committee meetings, took minutes, clipped newspapers, drafted correspondence. He was indefatigable. And he was effective too. During this period no progressive piece of legislation was passed in B.C. that Reg did not have a significant hand in bringing about, including the province’s first Police Act,Ombudsman’s Act, and Human Rights Code.

When you went into a meeting with Reg, you knew that you had a meticulously prepared ally. More importantly, you also knew that you were very unlikely to lose any argument. The first sign of trouble for his opponents would come when he sat down and opened his file. His correspondence would be neatly ordered with the most recent correspondence on top. Briefs were annotated with pages flagged. Notes delineating issues for discussion would be prepared in shorthand (writing longhand wasted time and obstructed thought). His fountain pen would lie ready on a blank pad of paper. Reg would then set the agenda and discussion would flow through him. Points and counterpoints would be made. Reg would insist on a careful gathering of facts and principled, reasoned treatment of the issues. Solutions were not always found, but there was rarely any doubt as to who had the better day. His appearance could be misleading. He was short, and had the standard issue slightly soft body of a balding middle-aged academic. He greeted friend and foe alike with a warmth that seemed at odds with the tough-minded interlocutor.

He was certainly not a power dresser. He’d be wearing one or other of his two blue blazers and of his two blue striped ties. But this told a consistent story. He was motivated by a deep desire to help the powerless, the persecuted, the victims of injustice. The human warmth was genuine. People were what mattered and principled argument was both their servant and liberator. The rest was mere window dressing. He was an easy person to respect even if you disagreed with him, an elusive trait in the principled and strong-willed who, therefore, do not shrink from conflict and whose ideals are often difficult to live up to. He had been prepared for his role from near childhood. He was a precocious student and activist in his native England. From the age of 10, he was involved in the cooperative (socialist) movement, becoming a committed internationalist and pacifist. By the time he had reached adulthood he had used his skills as an organizer and as a linguist to plan various international and national events.

He had even been sponsored to go on lecture tours in Europe and North America to spread the creed of world peace and cooperation. When the second world war came he remained steadfast to his principles and refused military service on conscientious grounds. He was persecuted and called a coward by former friends, neighbours, and others, even though he spent the war in extremely dangerous civilian service surveying bombed buildings to determine their safety and searching for undetonated bombs. After the war, he completed an undergraduate degree at the London School of Economics. He then left for the University of Minnesota to complete a Ph.D. in sociology and began work in the U.S. as an academic. Naturally, he couldn’t keep his political views or his activism in the background, and he drew the attention of Senator McCarthy’s minions.

He was asked to state, for the record, whether he was then or ever had been a communist. Reg’s response was that it was none of their business, and he made them go away. He came to the University of British Columbia in 1959 and retired as an emeritus professor in 1986. Sometime in the 1960s he became persuaded that sociological investigation could not yield much interesting knowledge about human affairs. His academic ambitions thus punctured, it is probably fair to say that he threw the best of his formidable energies into the service of the BCCLA for the next 25 or so years. Reg worked so hard for the BCCLA that people sometimes wondered whether he had time for a personal life or to attend properly to his academic work. In fact, he was so supremely well-organized that time never seemed an object for him. His motto was “if you want something done, ask a busy person to do it.”

He did all the normal family things, helping out at the hockey rink, tutoring his children’s studies, and so on. He built and maintained a cottage in Howe Sound. He made unusually good homemade wine. One of the high points of each year for him was to help his artist wife Monica in the preparation of handmade Christmas cards. The caring rationalist liked the limelight and had a streak of mischief in him too. In the early 1970s, the BCCLA received complaints that many businesses had policies requiring all male employees to wear short hair. Pacific Western Airlines seems to have been an especially bad offender. Reg and other BCCLA members descended upon the local PWA airport office to hand out leaflets featuring Pierre Trudeau’s fashionably lengthy locks.

Reg appeared on national TV asking the local PWA manager if he would hire the Prime Minister as a baggage handler. In short order, the BCCLA heard no more complaints from PWA employees. We will miss him, but his legacy and his counsels remain, and so in an important sense he is with us still, and we will continue to work together. Reg is survived by his wife Monica, his two daughters, Vanessa and Meilan, and two grandchildren, Miles and Aidan.