Over the past few weeks, we’ve received several calls from the media asking, “What are the consequences for people who are arrested at the Kinder Morgan protests?” Before answering this question it’s important to highlight the role that protests and civil disobedience play in a healthy democracy. 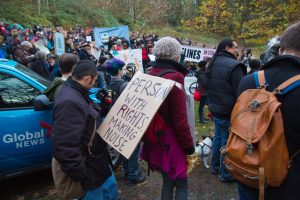 Protests and civil disobedience have played an important role for social and political change throughout our history. The Canadian Charter of Rights and Freedoms guarantees the right to freedom of expression and freedom of association. While there are reasonable limits to these rights, courts have commented that protests and demonstrations in public places are highly protected forms of expression.[1]

Judges have also commented on the important role that civil disobedience has played in protecting our fundamental rights and freedoms. In his Guide to the Law of Protest in C, Leo McGrady quotes the former Chief Justice of the Manitoba Court of Appeal, Samuel Freedman, who stated:

There have been instances in human history….in which disobedience to law has proved a benefit to law and to society.[2]

Justice Freedman noted that there are three qualities to civil disobedience:

Most protests and demonstrations are peaceful and lawful, with no arrests. Where you run the risk of arrest is when you breach a term of a court-ordered injunction.

An injunction is a powerful legal tool in the context of protests and civil disobedience. It is a legal remedy granted by the court, in the form of a court order, to prevent interference with the legal rights of a person, company, or government. If you breach one or more of the terms of an injunction, you may be arrested and charged with either civil contempt of court or criminal contempt of court. Charges of civil contempt are far more common than those of criminal contempt in British Columbia.

This is not a criminal offence. If you are charged with civil contempt, you will be prosecuted before a judge by the party who obtained the injunction. The party will need to prove beyond a reasonable doubt (the criminal standard of proof) the following three elements:

This is a criminal offence.[3] If you are charged with criminal contempt, you will be prosecuted by Crown Counsel before a judge. The Crown will need to prove beyond a reasonable doubt the following four elements:

The potential penalties for civil and criminal contempt are the same. You may receive a fine or, in exceptional cases, jail time. Or, you may appear in court and charges will be stayed.

Other potential charges that can result from acts of civil disobedience include:

In British Columbia, police recommend charges to Crown Counsel, and the Crown approves charges. One criteria in assessing whether or not to approve a charge is whether a prosecution is in the public interest. For charges related to civil disobedience, factors that favour prosecution may include:

While every circumstance is different, we can learn from the latest series of arrests on Burnaby Mountain. The majority of people who have been arrested are released by police on a promise to appear in BC Supreme Court for a charge of civil contempt of court. These promises to appear contain conditions not to further breach the terms of the injunction. If you sign the promise to appear, and agree to abide by the conditions, you will be free to go. But, you will need to appear in court on the date noted. If you do not sign the promise to appear, and do not agree to abide by the conditions, you may be detained until the court date. Most of the court dates for the people charged with civil contempt of the Kinder Morgan injunction are set for June of this year. To date, a small number of people have been charged with criminal offences.

The question, “Will being arrested affect my employment prospects or travel plans?” cannot be answered with a simple yes or no. Arrests are recorded in police databases, and are considered “adverse contact” with police. The Office of the Information and Privacy Commissioner for BC found that such non-conviction information is routinely released on Police Information Checks (“PIC), You may be requested to provide a PIC when:

Canadian police agencies have information-sharing agreements with international policing and border services agencies, such as US Homeland Security. While non-conviction information is not supposed to be released to these agencies, there are cases where people have been refused entry into other countries based on such information. If you are convicted of a criminal offence, that offence will certainly be shared. Depending on the country, you may be eligible to apply for an entry waiver if you are refused entry.

Another potential consequence of being arrested is if you are a non-citizen of Canada. In certain cases, your immigration status may be affected by criminal charges or convictions. You may want to consult with an immigration lawyer prior to participating in acts of civil disobedience that have the potential to result in criminal charges.

If you plan to participate in a protest or an act of civil disobedience, know your rights! Read Leo McGrady’s Guide to the Law of Protest in BC here. It is an invaluable resource that informed much of this post.

[1] Justice Stuart, in R. v. Mayer, [1994] Y.J. No. 142 at paras. 7-9, stated that: A healthy democracy demands an active, informed citizenry willing, nay, eager, to engage in constructive public debate. Our laws must sustain and promote free public discussion. To interfere unduly with this freedom threatens the survival of our democratic existence. Any laws limiting freedom of speech must be designed to protect other fundamental freedoms and be enforced with utmost sensitivity to avoid unnecessarily daunting the desire of any citizen to engage in public debate. Our laws, institutions and society as a whole must develop and abide by a healthy tolerance for the commitment some exercise in pursuing their beliefs. ­­­

[3] Although it is considered a criminal offence, this specific offence is derived from common law and not listed as an offence in the Criminal Code.