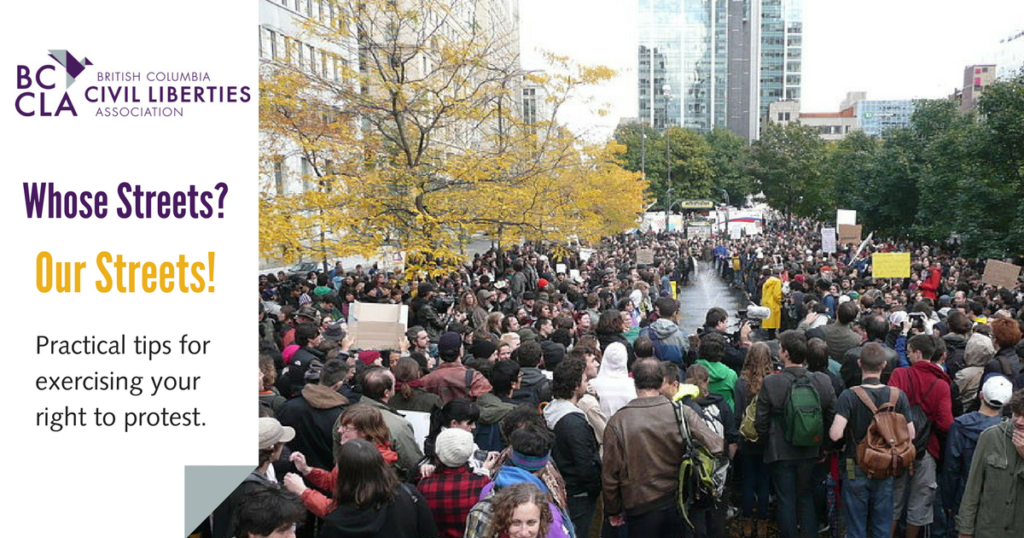 Here are some quick tips from our 2014 Annual Report to help you safely exercise your right to protest.

At the BCCLA we believe that the protest is a critical part of free expression and assembly rights.

For individuals, the act of protesting not only makes their dissent visible to others, it brings them face to face with people who share their concerns. Protest is first an act of expression, and then an act of communion.

For our communities, protest, demonstration, and dissent advance critical conversations about public policy and government accountability.  Canadians have protected these rights in our most fundamental laws because they are the bedrocks of healthy democracies.

For those reasons, the BC Civil Liberties Association believes that every person in Canada should be able to engage in non-violent public protest. That’s why in 2014 we took our “Protest Rights Workshops” to communities across BC’s north, the lower mainland, and the gulf islands delivering practical tips to packed rooms.

If you’re preparing to exercise your democratic right to demonstrate this summer, here are just a few tips that we cover in the workshop.

The Law of Protest in BC

First, please note that this piece is legal information only, not legal advice. Every arrest situation is different, and only your lawyer can provide advice. We also wish to recognize that while our workshop deals with BC and Canadian law, Indigenous laws continue to operate on the land. We recommend Leo McGrady’s fantastic “Guide to the Law of Protests in BC- Cedar as Sister edition,” for deeper discussion. Leo’s guide is the inspiration for much of what we share in our workshop, and we thank him for his many years of great work on this subject.

Planning to protest- Things to bring with you:

However, if you record or photograph something they think could be evidence, they have the right to seize your device in order to protect that evidence. If you promise to retain the evidence in your care and provide your name and address, the police are more likely to let you keep your camera. Police practices vary from region to region.

Remember that calls and messages can easily be picked up by police, even if it’s illegal for them to do that. If you suspect that you are being monitored, take the batteries out of your cellphone. Even when turned off, cell phones can pick up and transmit information if they are hacked by authorities.

Under the Police Act in BC, uniformed police are required to identify themselves. We suggest that protesters take down the names, badge numbers, and descriptions of crowd control officers while everything is going smoothly. It can be difficult to gather this information if the situation escalates. You are entitled to photograph officers and to ask them to identify themselves.

Be aware that undercover police officers may be present at a protest and that they are not required to identify themselves. If you suspect that someone is an undercover officer, do not expose them by shouting and pointing at them; you may be charged with obstruction. Instead, find discreet ways to inform the people around you of potential undercover police presence. Be very careful about what you say on social media, as it can be used against you in legal proceedings.

Always leave in groups following a protest. This is the most vulnerable time for arrest. People are most often improperly targeted for arrests at the end of the demonstration.

For more information on your rights in the event of detention or arrest, look at the BCCLA’s Arrest Handbook and Arrest Pocketbook, available in English, Spanish, Vietnamese, and Arabic at www.bccla.org/arrest.

Previous Post: Shut the frack up!
Next Post: In the wake of tragedy: acting together against Islamophobia