Update: This morning the decision in Jessica Ernst’s case was delivered.

In a 5-4 decision, the Supreme Court of Canada has ruled that Jessica Ernst cannot use the Charter to hold an Alberta energy regulator accountable for an alleged violation of her right to freedom of expression.

The Court ruled that the regulator was protected by an immunity clause, and that Ms. Ernst should have pursued her rights through other legal avenues.

Everyone at the BCCLA is disappointed by the Court’s decision, which denies Ms. Ernst the ability to use the Charter to defend her right to free expression, and is a step in the wrong direction for the accountability of government regulators.

The Charter guarantees everyone the right to an appropriate and just remedy if their constitutional rights are violated, but a majority of the Court has now said that in some circumstances, legislatures may shield certain government administrative decision makers from Charter scrutiny. This decision has worrisome implications for people across the country seeking to hold government-appointed decision makers accountable for egregious unconstitutional actions 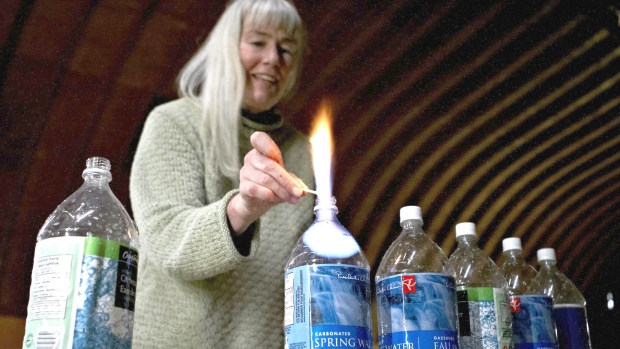 Jessica Ernst burns off some of the methane that is in her well water in Rosebud, Alta. (Jeff McIntosh/Canadian Press)

Imagine the tap water in your home was so contaminated with toxic chemicals that you could light it on fire.

Imagine the government agency tasked with responding to these kinds of problems wasn’t taking action and seemed to be ignoring your repeated complaints. Now imagine that after doing everything you could to get your concerns taken seriously, including speaking out publicly and engaging the media, you were told by that agency that they would not accept further correspondence from you unless you stopped speaking out publicly, and they began returning your letters unopened. Your health and safety are at risk, and the government agency responsible is refusing even to hear from you unless you stop your public advocacy.

Would you feel silenced? Like your freedom of speech had been violated? Alberta resident Jessica Ernst went through just such an ordeal, and she’s fighting back, all the way to the Supreme Court of Canada. The British Columbia Civil Liberties Association will be there, joining the legal fight to ensure that Alberta’s energy authority – and regulatory bodies across the country – can be held to account when they violate people’s fundamental rights.

Jessica Ernst lives on a rural property near Rosebud, Alberta. Her home is supplied with fresh water by a private well that draws from the nearby Rosebud Aquifer. Between 2001 and 2006, EnCana, a North American oil and gas company, engaged in hydraulic fracturing, or “fracking”, for methane gas at dozens of gas wells adjacent to her property. The operation involved drilling into the ground and injecting large quantities of highly toxic fracking fluids. Soon after the operations began, Ms. Ernst’s well water became severely contaminated with hazardous and flammable levels of methane and other toxic chemicals. Her water became so contaminated with methane that it could be lit on fire.

Jessica Ernst repeatedly brought her concerns to the attention of the Alberta Energy Regulator, which is responsible for receiving public complaints, conducting investigations and taking enforcement action when the rules have been broken. She also voiced her concerns publicly, through the media and with fellow landowners and citizens. She was critical of the Regulator’s response to the contamination, alleging that despite clear knowledge of potentially serious industry-related water contamination and breaches of the law by EnCana, the Regulator had failed to respond or take appropriate action to address these concerns, and was basically ignoring her complaints.

In 2006, the Regulator took its disregard of Ms. Ernst’s complaints a step further: a manager informed Ms. Ernst that he had instructed staff to avoid any further contact with her. Her subsequent letters were met with silence and returned unopened. She was told by a member of the Regulator’s legal branch that they would not reopen regular communications with her until she agreed to raise her concerns only with the Regulator, and not publicly through the media or with other citizens. She was unable to lodge complaints, register concerns, or participate in the Regulator’s compliance and enforcement processes. She was essentially silenced in her attempts to register her serious and well-founded concerns that EnCana’s fracking activities were adversely affecting her groundwater supply. She believed she was being punished for publicly criticizing the Regulator and bringing unwanted attention to its failure to act.

So she’s fighting back.

Ms. Ernst launched a lawsuit against EnCana, the Alberta government and the Regulator alleging that EnCana had negligently fractured into the Rosebud Aquifer and that the Alberta government and the Regulator had been negligent in the way they investigated and enforced the law. She also alleged that the Regulator had violated her right to freedom of expression, protected by section 2(b) of the Canadian Charter of Rights and Freedoms, through its refusal to accept her complaints and pressure to cease her public advocacy.

However, in court, the Regulator pointed to a section of Alberta’s Energy Resources Conservation Act that it said barred her claim and gave the Regulator immunity from her lawsuit. And, disappointingly for those of us who believe that government agencies must be accountable to the public they are meant to serve, the Alberta courts agreed, holding that because of that section of the law, her lawsuit against the Regulator could not proceed. Ms. Ernst is now taking her fight to have her allegations against the Regulator heard all the way to the Supreme Court of Canada, which will hear her appeal today.

A pattern of silencing dissent

At the BCCLA we’ve seen – and fought – these kinds of attempts to shut out and shut up community members and First Nations before. Unfortunately, in recent years, there have been numerous examples of energy regulators and legislatures seemingly attempting to narrow the opportunity for public input into resource decisions, and a negative attitude (or worse) on the part of government towards opponents of resource development. From the National Energy Board slamming shut the doors of its hearing rooms to the public; to the RCMP and CSIS spying on citizens opposed to the Enbridge Northern Gateway pipeline project, interfering with their rights to freedom of expression, assembly and association; to SLAPP suits brought against activists like the ones fighting Kinder Morgan’s Trans Mountain energy pipeline, we’ve publicly fought back against powerful interests trying to muzzle critics, stifle civic engagement, and avoid transparency and  public accountability for their actions. But a government agency telling a landowner that her complaints about flammable tap water will not be addressed until she stops speaking out publicly, and then a court telling that landowner she has no way to make a legal claim for this possible breach of her Charter-protected rights is, for us, unprecedented. So we’ll be at the Supreme Court of Canada today to fight back on this case, too.

As a human rights organization, we’re disturbed by the government’s argument, upheld by Alberta’s Court of Appeal, that provincial legislation can insulate a regulator from claims that it has violated an individual’s Charter rights. We’re intervening in the case at the Supreme Court of Canada to argue that governments cannot pass legislation that gives them a free pass to violate fundamental rights and freedoms without judicial scrutiny or oversight. The Charter is the supreme law of Canada and guarantees that anyone whose rights or freedoms have been infringed or denied may apply to the courts to obtain a remedy the court considers appropriate and just in the circumstances. What the Alberta legislation – and provincial legislation like it across the country – purports to do is to deprive the courts of their ability to determine an “appropriate and just” remedy when someone’s Charter rights have been violated. In our view, this violates a fundamental principle of our legal order: that where there is a right, there must be a remedy.

The Supreme Court of Canada has said that “a right, no matter how expansive in theory, is only as meaningful as the remedy provided for its breach.”[1] Ms. Ernst has been told by the Alberta courts that she will get no remedy for the alleged violation of her constitutionally protected free speech rights. We’ll be urging the Supreme Court of Canada to reverse that decision and affirm the importance of appropriate remedies for Charter breaches, no matter what kind of government agency commits them.

Ms. Ernst’s fight against the fracking operation in her backyard is far from over. But we hope that this part of her fight – to participate in important public debate, to speak out, and to obtain an appropriate remedy if Charter rights are violated – will soon be won.