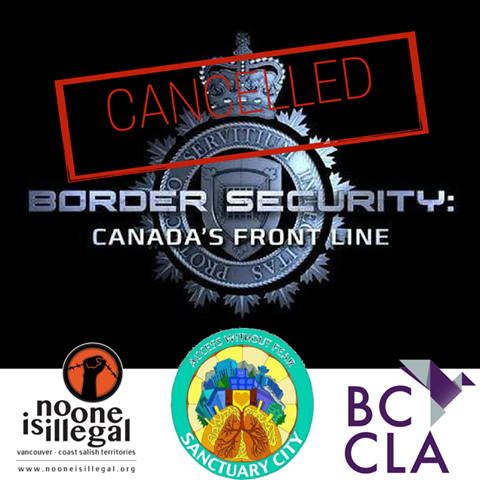 In 2013 the BCCLA joined a coalition of impacted families, human rights groups and community organizers advocating for the cancellation of the “Border Security” reality TV show.

Today, we are celebrating victory.

Amidst sustained public outcry and a finding by the federal Privacy Commissioner that it had broken the law, the Canada Border Services Agency (CBSA) has finally agreed to end its involvement in the controversial show.

The death knell for this show came in the form of findings from the federal Privacy Commissioner.  A privacy complaint was brought by the BC Civil Liberties Association (BCCLA) in 2013 on behalf of Oscar Mata Duran, who was removed to Mexico following a CBSA raid of his Vancouver workplace in 2013. The federal Privacy Commissioner found that CBSA broke the law by participating in the show’s production, violating key provisions of the Privacy Act, and relying on inadequate consent.

In his decision, the federal Privacy Commissioner found that the “consent” the CBSA relied on to justify the disclosure of people’s private information was grossly insufficient. “[I]n large part due to the context in which filming occurs, individuals are not providing full and informed consent to the disclosure of their personal information, as would be required by the Act,” he wrote. 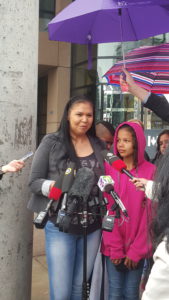 Diana Thompson,who campaigned against the show after her husband was illegally filmed and then deported.

At least seven other men at the construction site were also non-consensually filmed and deported following the raid. “This is actually difficult news for us to hear given all the hardship our family suffered,” says Diana Thompson, an Indigenous mother whose husband Tulio Renan Hernandez was filmed and deported to Honduras after the raid. “CBSA should never have been involved with a show that exploits families’ pain in the first place. We are grateful for all our supporters that stood with us for three years.”

Ms. Thompson authored a petition that garnered 25,000 signatures and forced the episode featuring the raid off the air. She was joined by 90 human rights groups including Amnesty International, Idle No More, Canadian Labour Congress and the Canadian Bar Association asserting that deportation is not entertainment. In addition, as part of the Cancel Border Security Campaign, 250 actors, directors, screenwriters, authors producers and musicians who released an open letter challenging the show’s ethics on informed consent.

Alejandra López Bravo of the group Sanctuary Health said “This decision is an important recognition that everyone has human rights regardless of immigration status. Unfortunately CBSA continues to act unfairly off camera with the migrant workers who grow our food, raise our kids and build our cities, and families continue to live in fear of accessing basic services such as health, education and workplace safety. That needs to change too!” 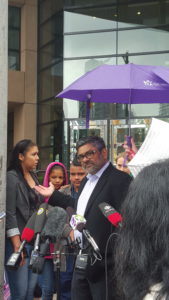 “While this is a critical recognition of the misconduct by the CBSA in their treatment of migrants, we must not lose sight of the continued injustices against migrants like Oscar who are held in detention for months or years without charge. In 2015 there were 2,458 migrants detained in Canada for 232,266 days, and 93 percent of refugee claimants were held without any allegations of causing a threat to public safety. The detention of migrants is unjustifiable and we must end immigration detention.”

Ultimately, this show is yet another reminder of what still needs to be done.

We expect law enforcement across the country to heed these findings and commit to focusing on their responsibility to keep communities safe, not exploit them for for-profit ‘entertainment’.

Previous Post: Calling for a Public Inquiry on Canada’s transfer of Afghan detainees to torture
Next Post: Where Did the Stingray Inquiry Go?