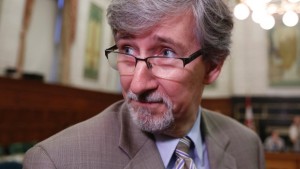 While eyes are focused on the rapid advance of Bill C-51, comparatively little light is being shone on some of the specific components of Canada’s national security and intelligence agencies that could be the subject of even further changes in law and policy.  Very quietly, the Standing Committee on Finance is doing a study of the “cost, economic impact and best practices to address the issue of terrorist financing both here in Canada and abroad”.

The BCCLA was asked to present to the Committee on the subject of terrorist financing and we took the opportunity not only to press the Committee on the dangerous failures of accountability in this sphere of national security operations, but also to highlight how Bill C-51 will make the situation infinity worse.

You can access our opening remarks from the hearing here.

Here is some of what we said to the Committee:

FINTRAC (the Financial Transactions and Reports Analysis Centre) is a key component of Canada’s strategy with respect to deterring and detecting terrorist financing.

The Arar Inquiry’s policy phase remains the most comprehensive assessment of national security accountability that Canada has ever undertaken and, as you will know, the Inquiry’s recommendations included a consolidated review process for national security and intelligence agencies that would include FINTRAC.  However, no review mechanism has been created.

Meanwhile, audits of FINTRAC by the Office of the Privacy Commissioner of Canada (OPC) have consistently demonstrated deeply troubling over-collection and retention of personal information.  And while FINTRAC itself maintains that one of its primary safeguards for privacy is its independence from law enforcement, Bill C-51 if passed would make that “independence” all but fictional.

As the Privacy Commissioner has just stated in his submission to the Senate Committee on National Security and Defence, Bill C-51 would make available to  17 federal departments and agencies, including FINTRAC, the RCMP, CSIS, CSEC and the CRA,  potentially all the personal information that any department may hold on Canadians.  All the 17 federal departments would be in a position to receive information about any or all Canadians’ interactions with government in what would be an unprecedented blurring of the mandate of the 17 different institutions.

We anticipate a steady stream of legal challenges if these proposed powers are enacted, and these developments make very pressing the need for an assessment of FINTRAC’s proper mandate and role in relation to other national security agencies.  And this necessitates a review of its efficacy.

The OPC’s audit reports echo the assessments on efficacy cited in the 2013 Report of the Standing Senate Committee on Banking, Trade and Commerce entitled “Follow the Money: Is Canada Making Progress In Combatting Money Laundering and Terrorist Financing? Not Really.”

There would appear to be a dearth of information to accurately assess whether the Canadian regime is meeting its objectives.  No empirical evidence is being generated to suggest that the regime is successfully accomplishing its mission.  To the contrary, what little evidence is available could only suggest either that there is considerably less terrorist financing than feared, or that the regime is not proving very effective at addressing it.

And yet, much of the response to this situation of genuinely failing to understand the need and efficacy of the regime is simply repeated urgings for more invasive powers, broader disclosures of sensitive, highly prejudicial personal information, more onerous administrative burden on the private sector, and more resources for FINTRAC and agency partners.

FINTRAC, as part of our national security apparatus, works with some degree of necessary secrecy.  But currently, that secrecy is inadvertently allowing for a failure of accountability.  There is no dedicated review body that can tell us whether FINTRAC is operating properly, successfully, and legally.  We say, this is a critical juncture for a long-overdue study and sober assessment of what the genuine need is and the most efficacious, accountable and rights-protective means of addressing that need.

One thought on “FINTRAC: the national security conversation that’s flying under the radar”