The BC Civil Liberties Association is deeply concerned about the effects on freedom of expression of recent changes to hate speech laws and the 2015 Memorandum of Understanding (MOU) between the Department of Foreign Affairs, Trade and Development Canada and the Ministry of Foreign Affairs of the State of Israel regarding Public Diplomacy Cooperation.

Section 318 of the Criminal Code prohibits advocating or promoting “genocide.” Genocide is defined as intending to destroy, in whole or in part, any “identifiable group” by killing members of the group or deliberately inflicting on the group conditions of life calculated to bring about its physical destruction. The “identifiable groups” covered by this provision were expanded in 2014 in the misnamed “cyber-bullying bill.” Identifiable groups now include sections of the public not only distinguishable by ethnic origin, but also by national origin.

Whatever other subjects the government intended to capture by expanding the hate speech laws to include “national origin,” it surely had a view to Israel, given that shortly after the passing of the Bill, the government issued an MOU with Israel in which it claims “that the selective targeting of Israel reflects the new face of anti-Semitism.”

The BC Civil Liberties Association has had long-standing concerns about the use of hate speech laws, and in particular, about the ability of hate speech laws to chill legitimate political speech. Our association is unequivocal in denouncing anti-Semitism and other forms of racism. We believe that the goals of fighting racism and defending civil liberties can and must be advanced together and that censorship weakens Canadians’ freedom without reducing racism. We best defeat racism by actively promoting arguments in favour of racial amity, not by enlisting the state to silence people. 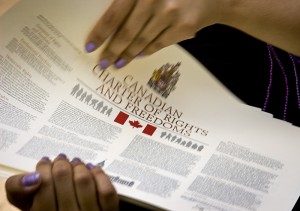 All decent people will agree on the noxiousness of anti-Semitism. But reasonable and decent people can and do differ about what the law should do to address racism. The BCCLA has long argued against “hate speech” laws, which do more damage to democratic debate than they do to protect those vulnerable to acts of bigots. The expansion of the hate speech laws and the language of the recent MOU clearly suggest that strong speech criticizing the state of Israel or its policies could be construed as illegal. Yet this is speech clearly protected by the Charter.

This situation constitutes a two-fold threat. The Charter rights of Canadians whose speech criticizes Israel are threatened. In addition, failing to meaningfully support Canadians’ right to political speech in this context, threatens the legitimacy of Canada’s work to combat anti-Semitism.

The BCCLA joins many organizations in calling on the Canadian government to ensure that citizens’ Charter rights are protected in the context of political speech and legitimate political actions, such as boycotts, with respect to criticism of the state of Israel.

6 thoughts on “Freedom of expression and criticism of Israel”