In this post, the National Security Blog breaks the fourth wall to share with our readers some observations after a morning on Parliament Hill before the House Standing Committee on Public Safety and National Security.

Yesterday was the first day of non-governmental testimony in the House Standing Committee on Public Safety and National Security’s study of Bill C-51. It’s always a privilege to be invited to Committee, and just between you, me and the internet, I’m always excited to go through the “Parliamentary business” door. 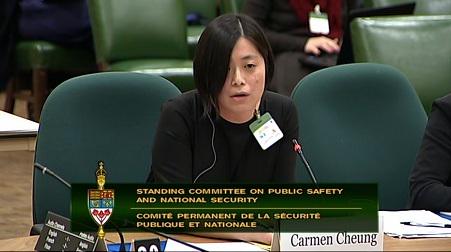 I was the first witness to testify yesterday, and if you’ve been following our news these past few days, you’ll see we have serious concerns about Bill C-51. Our concerns are as far-ranging as the proposed legislation itself – from dangers posed to human rights and civil liberties to the effectiveness of these measures in protecting national security and public safety. We shared these concerns with the Committee in the hopes of assisting it in its study of this complex omnibus bill.

The first question of the day also went to me: “Are you fundamentally opposed to taking terrorists off the streets?” This was, in fact, the only question Government MPs asked during the entire first hour of testimony. As Hansard will reflect, my answer to that question was “no”. (I also went on to make some further observations about why the BCCLA did not think Bill C-51 was the best way to “take terrorists off the streets”; you can watch the hearing here.) When I came out of the Committee room and into the media scrum, the reporters all wanted to know: What was your reaction when he asked you that question? And I’ll have to confess that at the moment, with a bank of cameras in front of me and microphones all around, I didn’t have a much better answer than the one I gave to the Committee.

But this is what I should have said: The question reflects what appears to be a troubling tendency to ignore substantive critiques of Bill C-51 in favour of going after the credibility of the critic.

We saw this earlier in the week when the Public Safety Minister characterized critics of the bill as “so-called experts” during his testimony before the Committee. (I hope he wasn’t referring to Professors Kent Roach and Craig Forcese, who have been doing brilliant and groundbreaking work in producing real-time scholarship on Bill C-51 over at antiterrorlaw.ca. Professor Roach’s credentials in national security law, criminal law and constitutional law pretty much speak for themselves, and Professor Forcese literally wrote the book on national security law.)

And we saw it last night, when Ihsaan Gardee, the executive director of the National Council of Canadian Muslims had to respond to “questions” about whether his organization had “ties to groups that have expressed support for ‘Islamic terrorist groups’”.  As he pointed out, “McCarthyesque-type questions protected by parliamentary privilege are unbecoming of this committee.” But instead of being able to address the substance of his organization’s concerns about the bill and its impact on the Muslim community, Mr. Gardee was forced to spend his time defending against a purely ad hominem attack.

Bill C-51 is a bill deserving of real, substantive and serious debate. But it is difficult to have that discussion if critics are simply going to be subject to rhetorical attacks on their commitment in keeping Canada safe from terrorist attacks. In September 2001, President George W. Bush gave a speech officially declaring war on “terror”. With respect to whether countries around the world should support the American position, he famously said, “Either you are with us, or you are with the terrorists.” Today, as my colleagues are asking me how I felt after my testimony, this is the phrase that comes to mind.

20 thoughts on ““Either you’re with us, or you are with the terrorists””