J.S. Russell and D.A. Browne discuss the Supreme Court of Canada’s historic decision to strike down the ban on physician-assisted dying. 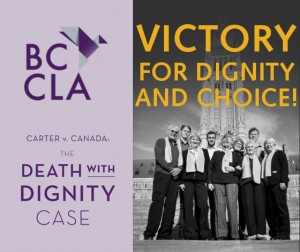 An historic decision must start with history. The Carter v. Canada case began a few years ago when civil rights lawyer, Joe Arvay, gave a keynote talk at a function sponsored by the B.C. Civil Liberties Association (BCCLA). Arvay used his talk to challenge the BCCLA to take on a legal test of Canada’s ban on assisted dying. After that talk, BCCLA lawyer Grace Pastine approached Arvay and they put together a team of litigants and lawyers, including Gloria Taylor (who suffered from ALS, or Lou Gehrig’s disease), other patients, private physicians, and the BCCLA. Together they crafted what is certainly the most important legal victory affecting all Canadians in the post-Charter era.

What a victory it is. A unanimous 9-0 decision by the Supreme Court justices. To emphasize their agreement, the justices took the further step of not reporting the author(s) of the decision. Symbols matter. The absence of a named author reflects the special depth of the court’s accord, one that cut cleanly across so-called “liberal” and “conservative” voices on the court.

Those who are wondering how the court could have come to an unreserved conclusion on such an apparently controversial topic should have a look at the arguments submitted to the court. These were a brilliant and unprecedented marshalling of legal, moral, and sociological evidence. In effect, Arvay and his colleagues closed the door on any fair-minded effort to sustain the current regime.

The court’s decision confirms the idea that respect for human dignity requires honouring individual autonomy and preventing suffering. Opponents of physician-assisted dying have always struggled to find a conception of human dignity to compete with this idea. They have been left to rely upon speculative, unsupported arguments about practical slippery slopes—that is, abuses and losses of trust that could follow physician-assisted dying. They have also relied on an alleged moral distinction between killing (in the form of administering or prescribing a lethal medicine) and letting die (in the form of withdrawing or withholding life-sustaining treatment). 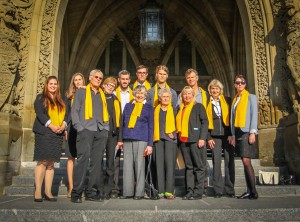 The evidence was largely there in 1993 against slippery slopes. Withdrawing and withholding life supporting care has been practiced legally and responsibly by the health care professions, without specific regulation, for generations. It is practiced far more frequently than physician-assisted dying will ever be, and it is open to exactly the same potential abuses. These have never materialized. It should have been little surprise, then, that the court’s review of recent evidence from jurisdictions that now permit physician-assisted dying confirmed no good evidence of slippery slopes.

As well, the killing and letting die distinction was never sound. Aside from deep controversy over whether the distinction is coherent, it sidesteps the fundamental question about what values are engaged by physician-assisted dying. It has always been formalism masquerading as moral argument. It was mentioned but not discussed by the court, and rightly so.

We continue to hear these arguments, of course. But we will hear less of them. Indeed, what has gone missing in the critics’ hand-wringing over slippery slopes is the potential this case presents for a virtuous slippery slope. How so?

We have seen this already in Canada. For the same objections to physician-assisted dying were raised a couple of generations ago over withdrawal of the new life support technologies. It would lead to losses of trust and abuses, particularly among vulnerable groups. But those concerns were unfounded—and misguided. Indeed, palliative care emerged and developed as an essential sphere of medical service once health care workers became intimately involved in end-of-life decisions.

It is not too much to expect that systematic attention to policy around end-of-life decision making, of the sort the Supreme Court is now asking government to take up, will emphasize the need for respectful palliative care, to everyone’s benefit. Indeed, this is the challenge government and the medical professions must now take up—how to make dying with dignity a reality for as many as possible.

Unfortunately, the need for legal protections over assisted dying is not ended by this case. The decision limits physician-assisted dying to competent adults who have a grievous and irremediable illness that causes intolerable suffering and who clearly consent to the termination of life. This leaves many incompetent adults and children who face irremediable and intolerable suffering without the opportunity to die with dignity. Canada has taken a long, if too long awaited, first step. Others still remain to be taken.

J.S. Russell, Philosophy, Langara College, is a past president of the B.C. Civil Liberties Association.

D.A. Browne, Instructor Emeritus, Langara College, is a member of the B.C. Civil Liberties Association Board of Directors.