In 1894, French novelist Anatole France wrote: “The law, in its majestic equality, forbids the rich as well as the poor to sleep under bridges, to beg in the streets, and to steal bread.” Of course, the rich rarely run afoul of these laws and, claims of majestic equality notwithstanding, their weight falls most heavily on those who are the poorest and most disadvantaged in our society. 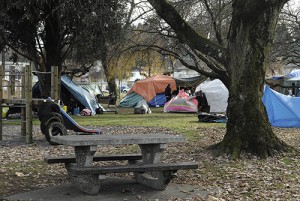 So it is with Abbotsford’s bylaws prohibiting sleeping or erecting shelters in parks or other public spaces. These laws apply to everyone – no overnight campouts at the playground, kids! – but their weight is borne by Abbotsford’s homeless population, who have nowhere else to go and have been repeatedly pushed out of public spaces—what one City Councillor refers to as the “Abbotsford shuffle” and others liken to a game of whack-a-mole.

Everyone agrees that homelessness is a critical problem in Abbotsford, but there appears to be little will to address it. Last year, the then Mayor cast the deciding vote against a 20 bed supportive housing facility, forgoing a promised $15 million from the province for the development and operation of the site. A few months earlier, the city gained notoriety for dumping chicken manure on an area occupied by people experiencing homelessness, and allegations that city officials slashed and pepper sprayed tents have resulted in small claims suits and a human rights complaint.

Fed up with the displacement and discrimination, a group of about 25 homeless Abbotsford residents came together in October 2013 on a small portion of land within the city’s Jubilee Park. Service providers and religious groups regularly serve meals and provide health care and other services in the park, and the people who set up their tents there reported feeling increased safety, security and stability as a result of living in community with one another. However, five days before Christmas, the City obtained an injunction order requiring the homeless residents to vacate the park and granting City officials authority to tear down physical structures and arrest individuals believed to be interfering with the order.

In light of these violations of their liberty, security, equality and freedom of assembly, the affected individuals and a society comprised of current and former drug users, called the Drug War Survivors, are challenging the constitutionality of the City’s bylaws and actions. Represented by the Pivot Legal Society and pro bono counsel, they have filed a lawsuit arguing that the City’s actions serve to marginalize, displace and increase their vulnerability, impair their ability to protect their own lives, safety, security and health, and increase their risk of being victimized by violent crime and property theft. All of this, they say, is an unconstitutional infringement of their Charter rights to life, liberty, security of the person and equality, and to their right to freedom of association and assembly.

We agree. Last week, we were granted intervenor status to make submissions in this important case. We intend to show the court how these bylaws constitute an unjustifiable infringement of the Charter right to liberty by unreasonably restricting access to public spaces that are held in trust by government for the use of their citizens. These restrictions on access to public space are particularly egregious for homeless individuals because they have no private space to which they can turn. Thus, the denial of the use of public space denies these individuals the use of any space. Such total exclusion from public space significantly interferes with the ability of the homeless to participate in a meaningful way in the democratic life of the community, which is an important aspect of what liberty is all about.

We’ve spoken out about the violation of homeless people’s fundamental rights before: in the Adams case challenging similar bylaws in Victoria, in the Woodwards injunction case, and in our lobbying against the Safe Streets Act and its criminalization of behaviour that is a result of poverty. We’re eager to add our voice to those of the homeless residents affected, and hope that in this case, the “majestic equality of the law” will result in protections for the rights of the most vulnerable.