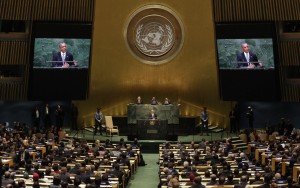 In a special meeting chaired by President Obama, the Security Council unanimously enacted Resolution 2178, a sweeping directive to all of the UN member states.

Last week, as the first wave of airstrikes were being launched against ISIL (or IS, or ISIS, depending on the naming convention being used), the UN Security Council held a special session, chaired by President Barack Obama. In this session, the Security Council passed Resolution 2178 – a sweeping directive to all of the UN member states to take steps to stop the flow of fighters from around the world from joining ISIL in Syria. As Martin Scheinin, former UN Special Rapporteur on human rights and counterterrorism, noted in a recent blog post, Resolution 2178 takes us back to the days immediately following the horrific events of 9/11, when the UN Security Council hurriedly passed Resolution 1373, which has served as the international legal foundation for many of the most problematic national security practices of the last decade. Indeed, as Professor Scheinin points out, Resolution 2178 basically “wipes out the piecemeal progress made over 13 long years in introducing protections of human rights and the rule of law into the highly problematic manner in which the Security Council exercises its supranational powers.” It is a sobering thought.

On Thursday, BCCLA Senior Counsel Carmen Cheung and Professor Kent Roach of the University of Toronto Faculty of Law published their own critique of Resolution 2178. Read at over at The Globe and Mail, or below.

UN wants to battle Islamic State, but is it fighting freedom?

Kent Roach and Carmen Cheung
Published in the Globe and Mail, October 2, 2014

The threat to international peace and security posed by the Islamic State in Iraq and the Levant (better known as ISIL) is a hard case, one which has prompted dramatic responses from the international community in recent weeks. Almost all of the public’s attention has been focused on the airstrikes launched by the United States and its Arab allies. Less discussed are the steps taken by the UN Security Council in response to the ISIL threat. In a special meeting chaired by President Obama, the Security Council unanimously enacted Resolution 2178.

Security Council resolutions create mandatory obligations on all states. Traditionally, they’ve been used to impose targeted sanctions on outlaw states that present a danger to international peace and security. Resolution 2178, however, acts more like international legislation. It will likely set the international agenda for counterterrorism law and policy for the next decade. Unfortunately, it sets a flawed agenda that is unlikely to make us safer but is likely to make us less free.

We have been here before. In the immediate aftermath of the 9/11 attacks, the Security Council adopted Resolution 1373, which also acted as international legislation, requiring every member of the United Nations to combat terrorism. Generally speaking, who can argue with the correctness of needing to combat terrorism? But the generality of Resolution 1373 allowed it to be abused and invoked by states seeking to limit civil liberties and basic human rights in the name of combatting terrorism and protecting national security.

Though adopted as a direct response to the extraordinary events of 9/11, Resolution 1373 has become a permanent fixture in the international legal order and has formed the legal basis for everything from US drone strikes in Pakistan, to draconian blacklists based on secret evidence, to the sharing of faulty intelligence that saw Maher Arar and other Canadians detained and tortured in Syria.

Resolution 2178 is like déjà vu all over again – hastily drafted at the insistence of the US and adopted in a moment of international crisis. But there are serious problems with this resolution. Crucially, it fails to define “terrorism”. The resolution aggravates this already ambiguous term by failing to specify that it concerns international terrorism – which is the threat posed by ISIL and its allies –and by linking terrorism with the even vaguer notion of “extremism”.

Just recently, economics professor Ilham Tohti was convicted by a Chinese court on counts of separatism and “illegal political speech”. Tohti, described by many as a moderate commentator on issues facing China’s Uighur minority, was sentenced to life in prison for remarks made online and to foreign media that, according to China, threatened national security and “social stability”. This verdict has been internationally criticized, but Resolution 2178 throws open the door to similar prosecutions by oppressive regimes the world over.

Governments already have a tendency to designate anything threatening the stability of the ruling power as a terrorist threat – we have seen shades of this here in Canada, with Aboriginal and environmental rights groups being subject to surveillance by Canada’s security agencies. The broad direction given by the Security Council in Resolution 2178 provides the legal justification for criminalizing travel, training and funding of the politically unpopular.

Indeed, Resolution 2178 doubles down on the bad bet that both the US and the UN Security Council made in the aftermath of 9/11 on attempting to regulate terrorism financing and on travel bans. Both regimes depend on the listing of suspected terrorists. Listing is problematic because it is based on secret intelligence that may never be revealed to those who are listed. Canadian Abousfian Abdelrazik landed on the UN list while abroad, and his lawyers spent a year in court before he could be allowed to return home. The UN subsequently de-listed him but gave no real reasons for doing so.

As one Canadian court has recognized, listing is Kafkaequese. It is also a process that is usually more than one step behind, if the aim is to stop the recruitment of potential terrorists. Intelligence estimates show as many as 130,000 people leaving western countries to fight with ISIL. Even if it could be made a fair process, listing cannot keep up with this rate of recruitment. Indeed, there are reports of thousands of new recruits since the recent military offence started.

Finally, the new resolution expands on already broad concepts of what it means to “support” terrorism by adding activities on the internet and social media to the list of potentially problematic conduct. Be careful what you tweet – it might land you on a terrorist watchlist, or worse. In the UK, recent terrorism arrests have resulted in charges of membership in a terrorist organization and advocacy of terrorism. If the war against terrorism is not to become perceived as a war against Islam, the focus should be on violence and preparation for violence – not the extremist ideology that may motivate the violence.

ISIL is a serious threat, but the Security Council’s hasty and under-debated response to it may do more harm than good, affirming the adage that hard cases do often make bad law.