… And we’re back! The BCCLA National Security Blog’s been on sabbatical this past year, but we’re back in residence now and kicking things off with some thoughts about the Supreme Court of Canada’s judgment  in Minister of Citizenship, et al. v. Harkat, et al. 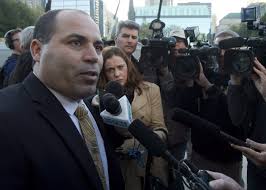 A brief refresher on security certificates may be in order. Security certificates, as readers of these pages will recall, are immigration mechanisms authorized under the Immigration and Refugee Protection Act. They are issued against non-citizens and serve to designate them as threats to public safety and national security. By itself, the certificate authorizes the arrest and detention of the named individual. If a Federal Court judge finds the certificate to be “reasonable”, then the named person can be deported from Canada. These individuals do not have to be charged – let alone convicted – of any criminal offence.

For over a decade, what security certificates have meant for Mr. Harkat and the other named persons has been solitary confinement, house arrest and the persistent threat of deportation to risk of torture. The government claims that much of the information and evidence used to support the certificates needs to be kept secret because disclosure might be “injurious” to public safety. That means they’re kept secret not only from the public, but from the named person as well. The named person is simply provided with a summary of the allegations against him, but IRPA contains clear language that the named person is not allowed access to any information that, in the reviewing judge’s opinion, would threaten public safety and national security. Given that these cases are – at their core – about public safety and national security, it’s difficult to see how anything in the public summary could provide meaningful explanation to Mr. Harkat or anyone else named on a security certificate. (More on this in a bit.)

As the headlines in Canada’s newspapers have announced, the Supreme Court upheld the security certificate regime as constitutional. This outcome is deeply disappointing, particularly with respect to what this means for Mr. Harkat. This decision opens the door to Mr. Harkat’s deportation to Algeria, a place where he has always maintained that he is at risk of torture.

But from the wreckage, there are still some things to be salvaged. The Supreme Court found the regime as set out in the legislation constitutional, yes, but in doing so, it repeatedly emphasized the importance of the judge’s role in ensuring the fairness of the security certificate proceedings. The Court clarified that judges hearing security certificate cases have a duty to ensure that the named person be provided with an “incompressible minimum amount of disclosure” to know and meet the case against them, and to be reasonably informed about all the evidence on the record. This means that the named person must have personally received enough disclosure and details about the case against him to be able to provide “meaningful” instructions to public counsel and “meaningful” guidance and information to the special advocates. Highlighting that judges are “vested with broad discretion,” the Court directed judges hearing security certificate cases to take an “interventionist approach” to preserve the overall fairness of the proceedings.

The Supreme Court also recognized that judges hearing security certificate cases will have to take an active role in making sure that only truly sensitive information is withheld, and to “ensure throughout the proceedings that the Minister does not cast too wide a net with his claims of confidentiality.” The Court made clear that the judge has a duty to be both “vigilant and skeptical” when it comes to government claims of secrecy and confidentiality, noting “government’s tendency to exaggerate claims of national security confidentiality.” Indeed, Chief Justice McLachlin’s judgment starts off with a rebuke to the federal government, which requested (and received) a bifurcated hearing at the Supreme Court – one public and the other secret – pointing out that  the secret hearing was unnecessary and “did not assist this Court in deciding the issues before it.” Rather, it simply “served only to foster an appearance of opacity of these proceedings, which runs contrary to the fundamental principles of transparency and accountability.”

The right to a fair fight

Ultimately, this case is about fairness – the right to a fair trial, to know what wrongdoing you’re alleged to have committed when your liberty and personal security are at risk. It’s about equality of arms in an adversarial process, which is how our legal system operates. There is no question that in matters of national security, there is an interest in protecting legitimate state secrets. But while national security considerations inform how we ensure fair trial rights are guaranteed, they cannot justify the complete failure to respect those rights.

In Mr. Harkat’s case, we would submit that it’s an open question as to whether the security certificate scheme really operated in the way contemplated by the Supreme Court here. The true test of whether the Court’s guidance is enough to make sure fundamental rights are respected will depend significantly on how its teachings play out in the lower courts in the remaining two security certificate cases concerning Mssrs Jaballah and Majhoub. It will be important to see, for example, what an “incompressible minimum amount of disclosure”, or the ability to provide “meaningful” instructions, actually means in practice. Of course, the problem with secret evidence is that you don’t know what you don’t know, so it is difficult to challenge the correctness or reasonableness of how a judge makes any of these decisions. Nonetheless, the Supreme Court has issued some strong pronouncements in support of both the duties and authority of courts to guarantee a fair trial – if these can be given real effect in future cases, maybe there’s a silver lining after all. Making sure that happens will require us to be vigilant as well.

**Check out also Professor Craig Forcese’s very informative rundown on the “winners” and “losers” in Harkat.

Previous Post: Despite controversy, filming of new season of Border Security underway
Next Post: Celebrating the International Day Against Homophobia and Transphobia