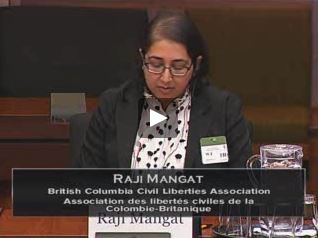 On April 2nd, 2014  the BCCLA sent Counsel Raji Mangat to Parliament to argue that proposed amendments to the Canada Elections Act are unconstitutional and undemocratic.

Our main concern with the proposed changes surround the removal of ‘vouching’ from the means by which voter identity may be proven.

The BCCLA has long been a vocal opponent of the voter ID laws. We believe that voter ID laws  seek to address a single, largely speculative problem –an unproven phenomenon of wrongful impersonation of voters – at far too great a cost – disenfranchisement of Canada’s most vulnerable and marginalized citizens.

Below, Raji explains how in in the last ten years Canada has systematically disenfranchised eligible but marginalized Canadians through the introduction of Voter ID regulations, and why the proposed changes to the Canada Election Act will aggravate this undemocratic trend.

Good evening. Thank you for the invitation to today’s hearing. I am here on behalf of the BC Civil Liberties Association, a non-partisan, non-profit organization based in Vancouver. My statement will focus on the BCCLA’s main concern – the removal of vouching from the means by which voter identity may be proven.

The BCCLA was critical of the original enactment of voter ID requirements in 2007. We have also intervened in a constitutional challenge to Canada’s voter ID laws in the Henry case. This case has been heard by the BC Supreme Court and the BC Court of Appeal. Both courts found that the voter ID laws are a prima facie violation of section 3 of the Charter. Both courts also found that the voter ID laws enacted in 2007 are justifiable in a free and democratic society. On Monday, an application was made to the Supreme Court of Canada for leave to appeal the BC Court of Appeal decision in Henry.

In its defence of the voter ID laws in the Henry case, the Attorney General of Canada himself pointed to vouching as one way in which the negative effect of the law on people without ID would be minimized. The Attorney General argued that vouching is a “failsafe” in the legislation because it allows eligible electors without the requisite types of ID to cast a ballot. Removing vouching as a means by which individuals can prove identity will certainly make this law unconstitutional and ripe for a Charter challenge.

Much has been made about the 39 forms of ID acceptable to prove voter eligibility. I ask the Committee to look critically at this list. While the listed forms of ID may indeed be largely available to a middle-class suburban voter, these are not viable forms of ID for many Canadians, including many of the people on whose behalf the BCCLA acts.

Of the prescribed forms of secondary ID – one – a letter from a shelter or soup kitchen may be within reach for some of these individuals, but all too many of our citizens are unsheltered. Theft of identity documentation is a big problem among the homeless population in Vancouver and in other cities. Obtaining and retaining current documentation is expensive and difficult for those with no fixed address. Where such identity documentation does exist, it will very rarely provide the individual’s current residence.

Everyone agrees that we need to encourage and increase voter turnout, particularly among first-time voters, and voters in certain communities. Everyone also agrees that we need to reduce irregularities in the voting process. The disagreement comes when we consider how to do this. Some of the measures to reduce irregularities being proposed in this Bill – such as the removal of vouching and limitation of the use of Voter Information Cards – will disproportionately and materially impact the ability of many of our most vulnerable and marginalized citizens to vote. They will “remove” irregularities by effectively disenfranchising these voters. That’s unacceptable.

In a free and democratic society, the right to vote cannot be sacrificed at the altar of convenience. There is a misconception that if we remove vouching, we will remove serious irregularities and, ergo, we will remove fraud. Voter ID laws have the potential to address one form of fraud – voter impersonation. Irregularities in how the polls operate – even serious ones – are not proof positive of voter fraud. All other minimally impairing options for reducing irregularities must be considered before we take even one step toward unconstitutional disenfranchisement. This would include improved recruitment and training of polling staff.

This Bill takes as its starting point an impoverished view not only of democracy in this country, but also of the integrity of Canadian citizens in exercising their most fundamental political rights. The Bill presumes voter impersonation fraud where there is evidence of none. It subverts the underlying purpose of the legislation, which is to foster the exercise of the franchise. Removing vouching from the legislation will do nothing to enhance public confidence in the electoral system; instead it will effectively nullify the political participation of the most marginalized and vulnerable in our society. In the BCCLA’s view, that would be the real threat to the integrity of our electoral system.