By Lara O’Brien and Peter Mitton/cbc.ca/thecurrent 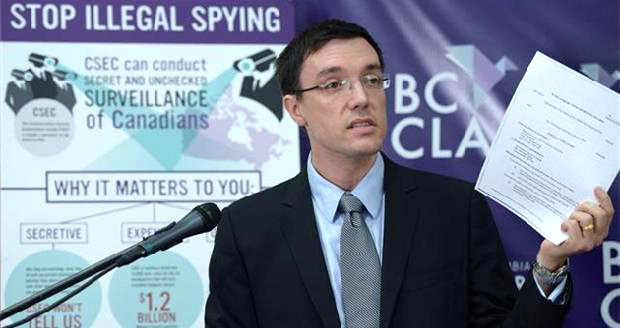 Canadians rely on their institutions to stand on guard for them and their country. But the B.C .Civil Liberties Association accuses Canada’s spy agency of doing a lot more than guarding — it says CSEC listens in on private conversations, threatens freedoms and violates charter rights.

There are recent allegations suggesting that CSEC or the Communications Security Establishment Canada not only spies on foreign governments — but spies on Canadians.

The B.C. Civil Liberties Association says that CSEC violates Canadians’ charter rights by intercepting private communications. And this week it launched a lawsuit against the Canadian Spy agency.

Joe Arvay is a lawyer with the B.C. Civil Liberties Association. He was in Vancouver.

We invited CSEC to speak with us. It replied that it can not comment on the case specifically because the matter is before the courts.

Its statement goes on to say:

“All of CSE’s activities are independently reviewed by the CSE Commissioner who, for sixteen years, has reported that CSE continues to act lawfully in the conduct of its current activities.”

Long before there was a concept of Big Brother, people were resentful of governments looking over their shoulders. But some say government snooping is essential to keep Canada and Canadians safe… and competitive.

John Ferris is a professor of history and a fellow at the centre for Military and Strategic studies. He maintains spying is all a part of living in a secure society. He was in Calgary.

But Steve Anderson isn’t convinced. He is with OpenMedia.ca, which has joined the B.C. Civil Liberties Association lawsuit. He was in Vancouver.