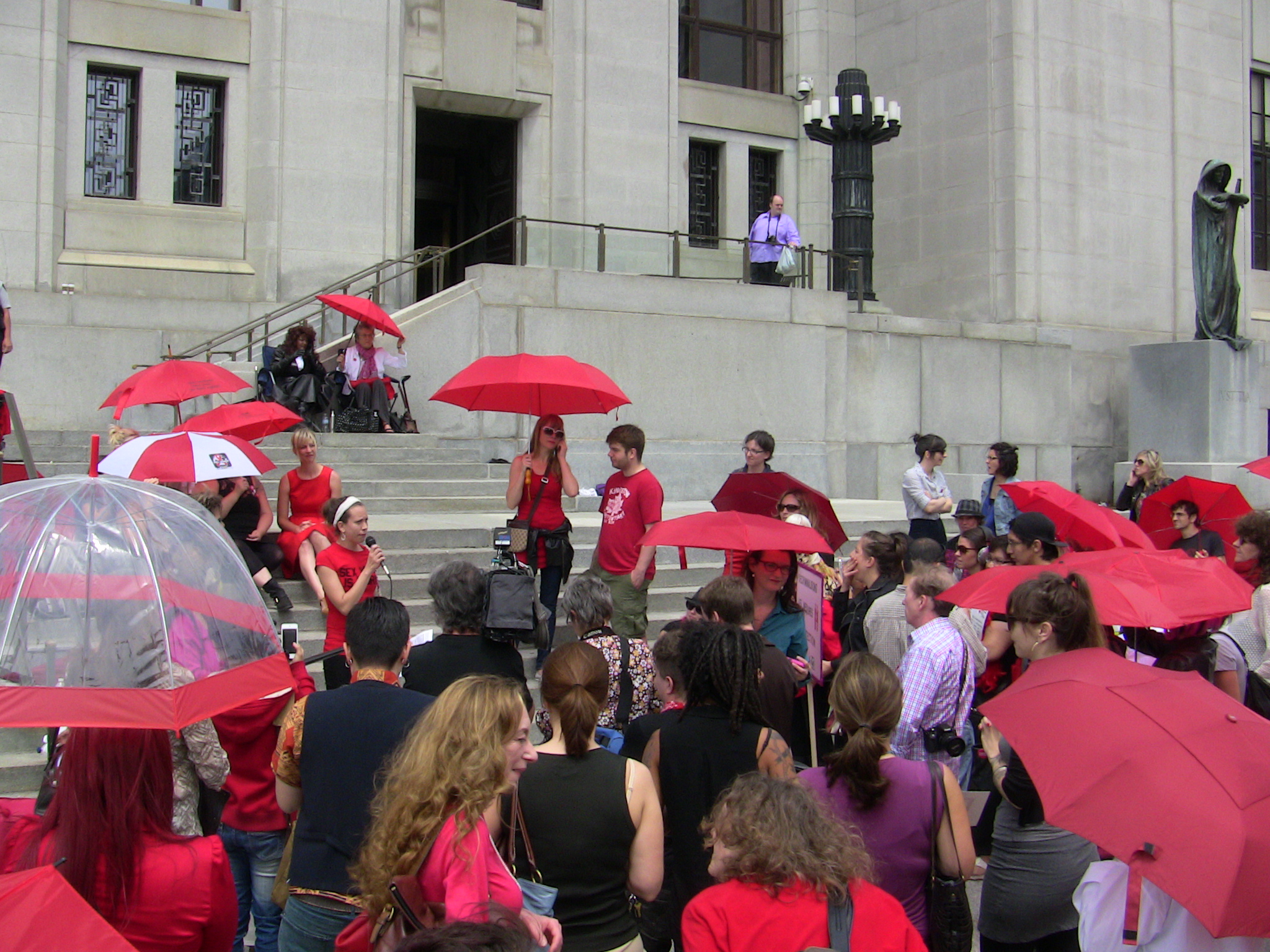 Photo Credit Metro News/Joe Lofaro. Terri-Jean Bedford, one of the three key litigants in the Supreme Court of Canada case challenging Canada’s prostitution laws, speaks to a crowd of demonstrators outside the courthouse June 13, 2013.

This Thursday, June 13th, the BCCLA appeared before the Supreme Court of Canada in Attorney General of Canada, et al. v. Terri Jean Bedford, et al., the historic challenge to the three provisions of the Criminal Code concerning prostitution.

The BCCLA participated in the lively day-long hearing, along with numerous other interveners, to urge the Court to strike down the legislation.  One important theme emerged from the hearing: while the Criminal Code provisions do not criminalize prostitution, they seriously jeopardize the ability of sex workers to perform their work safely.

This theme was reflected in the BCCLA’s argument. We focused on s. 213(1)(c) of the Code which prohibits sex workers from communicating with potential clients in public spaces. The ability of sex workers to screen potential clients, and to define the terms of consent, in a safe public space is vital to performing their work safely. The end-result of s. 213(1)(c) is an unconstitutional restriction on freedom of expression that endangers the health and security of already vulnerable sex workers. The BCCLA urged the Court to give this form of expression the highest degree of constitutional protection and to strike down s. 213(1)(c).

The BCCLA has consistently supported the decriminalization of sex work since the early 1980s. As we have said before, attempting to legislate the morality of others harms our ability, as a society, to create the kinds of policies and laws that could protect the safety of sex workers. Sex work exists. It has always existed and it is not going away. In fact, sex work itself is legal in Canada. The BCCLA and many allies want to ensure that sex workers are covered by health and safety protections – something that governments ensure for other kinds of work.

The BCCLA was represented by Brent B. Olthuis and Megan Vis Dunbar. The Court reserved judgment. We at the BCCLA eagerly await the result in this significant case.

Previous Post: Cross Country Checkup: Do you worry about the collection and logging of your personal data?
Next Post: Sensible B.C. has good chance of forcing marijuana referendum