Today, the BCCLA proudly celebrates the International Day Against Homophobia and Transphobia by reflecting on the place that civil liberties have had and continue to have in empowering queer communities across Canada. 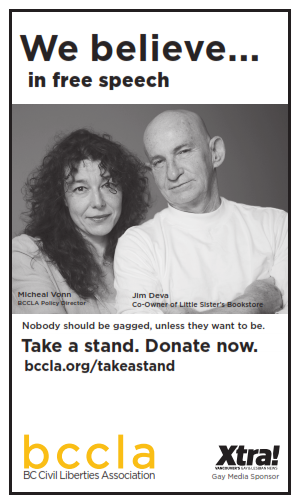 The strengthening of Canadians’ rights to make their own choices freely without state interference has supplemented the crucial human rights protections in the Charter of Rights and Freedoms and various pieces of human rights legislation to establish LGBTQ rights as a key part of the social and legal landscape. One has only to glance back 50 years to see how much progress has been made.

In 1967, when the young Pierre Trudeau famously commented that “there’s no place for the state in the bedrooms of the nation, and […] what’s done in private between adults doesn’t concern the Criminal Code,” he paused only slightly before adding, “When it becomes public is a different matter.” Although Trudeau was an outspoken defender of a bill proposing to decriminalize anal sex, it’s clear that he was far from an unequivocal supporter of the gay community. Mr. Trudeau’s famous statement reminds us that some of the most significant early gains made by the queer rights movement in Canada came in the form of privacy rights. You don’t have to like us, early activists said. You just have to get out of our bedrooms.

Of course, Canadian queer activists and their supporters had more ambitious goals than grudging acknowledgement that they should not risk jail-time for whatever they got up to in bed. But the privacy rights framework has long been a useful tool for individuals who, for a variety of reasons, find their everyday acts of living criminalized: in the 1960s, the queer community; more recently, sex workers, those in polyamorous relationships, and individuals living with HIV/AIDS, to name a few. A whole-hearted embrace of the queer community by the government and Canadian society was still a long way off in 1967. But in 1969, when the amendments to the Criminal Code became law and same-sex sexual activity was decriminalized, Canadians confirmed their commitment to the idea that private, consensual activities between adults were no one else’s business.

Out of the bedroom and into the bookstore 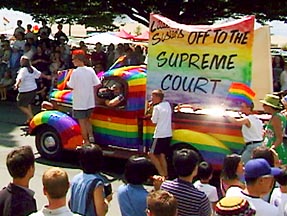 The BCCLA helped queer rights venture out of the bedroom and into the bookstore with our long-time support for Little Sisters. The iconic Vancouver queer bookstore waged (and continues to wage) a brave fight against government censorship and homophobia. Throughout the 1980s and 1990s, Little Sisters’ shipments of books from the United States were frequently detained at the border, and often returned to them in a condition that made them unsellable. Other times, they were simply destroyed on the spot. Canada customs officers deemed these materials to be obscene, and in a shocking example of state censorship, decided that their arbitrary definition of obscenity was sufficient grounds for preventing these materials from entering the country. Although the Canadian state no longer deemed same-sex relationships to be criminal, it had no qualms about classifying them as offensive and indecent. The BCCLA has offered ongoing support to Little Sisters, including acting as a co-plaintiff in a court case that went all the way to the Supreme Court of Canada.

We were also part of another front in the war against homophobia in the late 1990s, this time in a public school library. When the Surrey School Board attempted to ban lesbian and gay themed children’s books in 1997 , we offered support to the group of Surrey parents, students and teachers who challenged this decision in court on the grounds that it violated their right to freedom of expression and equality without discrimination. As civil libertarians, we know it is not the place of the state to outlaw beliefs, even those that we think are discriminatory and abhorrent. But through a vocal defence of free speech and equality before the law, we could help young Surrey students to be exposed to the sorts of positive depictions of healthy same-sex relationships that stand a chance of winning their minds and hearts.

Free expression has many faces 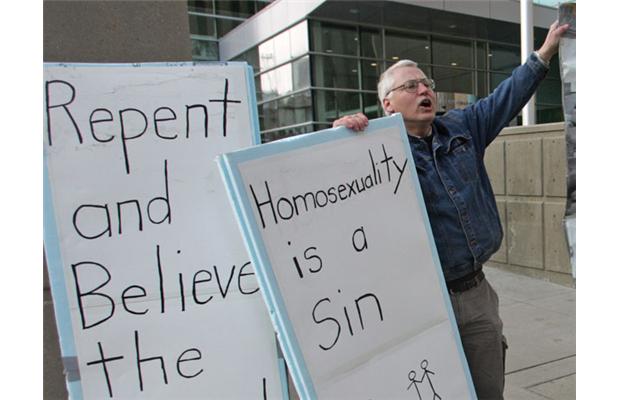 While we are fiercely proud of our support for Little Sisters and our advocacy with the Surrey School Board, we acknowledge that we occasionally find ourselves defending the rights of those who oppose our values on these matters. Defending freedom of speech, for example, includes defending the rights of individuals to distribute homophobic or transphobic material if they choose to – even as we will fight back against their ideas. Defending freedom of association and freedom of religion can mean defending the right of groups to organize themselves around principles that include the condemnation of same-sex sexual activity.

It is our position that the repugnance of a certain set of beliefs, even to a majority of Canadians, cannot be the basis to deny these individuals and groups the fundamental rights of freedom of association, religion and speech. Indeed, it was not so long ago that queer sexualities themselves were considered repugnant to a majority of Canadians; it was only because our government and the courts recognized the fundamental rights of citizens to freely express their identities and views – regardless of whether these identities and views were widely celebrated or even accepted by the majority at the time – that queer rights were able to gain a legal foothold in our country at all. Thus, by ensuring that all views, even homophobic ones, remain constitutionally protected, we are preserving the very conditions of possibility that allowed Canada’s queer rights movement to grow in the first place.

Equality is not just a legal principle

While Canada has increasingly become a place in which those individuals who use their constitutional freedom of speech to express homophobic views are denounced and marginalized, there remains much to be done. Such profound societal shifts are not solely the product of legislation or actions by governments. Legal and policy change of the kind the BCCLA works on are an important part of the story, but not the only part. While we continue to work to prevent attacks on queer expression and to keep public school sex education secular and queer positive, we know that there are many incredible organizations and activists who have devoted their lives to going way beyond the legal and policy realm, opening closed minds, creating safe spaces and demanding that society not merely decriminalize, not merely accept, but embrace queer identities and non-normative gender and sexual identities. We salute and support this work.

By defending the rights of free speech and association for everyone, regardless of their views, we help ensure that LGBTQ organizations are free to spread their anti-homophobia messages, to reach young queer individuals in need of support, to continue their work without fear of reprisals. We share in that commitment against homophobia and transphobia and we will continue to fight for the equality, dignity and freedom of LGBTQ people. We are also proud to defend the rights of voices within the diverse queer community, ensuring that groups that engender controversy like Queers Against Israeli Apartheid are able to continue to push the envelope of queer rights discourse, to challenge Canadians (queer and straight alike) to think more deeply about the ways that different forms of oppression are bound up with one another in complex ways. We believe that free speech profoundly enhances democracy, and know that queer voices of all stripes are an integral part of a robust Canadian public discourse. 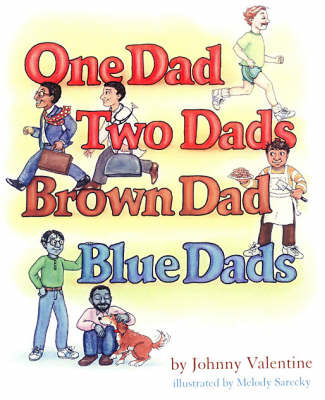 A lot has changed in the last four and a half decades of queer rights struggles in Canada, and a civil liberties framework continues to be a key weapon in the arsenal of queer rights activists. Same-sex sexual activity has been legal in Canada for nearly half a century. One Dad, Two Dads, Brown Dad, Blue Dads is available in the libraries of Surrey public schools. But the fight against homophobia is far from over. Just this past week, Todd Hauptman, campaign manager for Langley BC Liberal candidate Mary Polak and a gay man, resigned from his post, citing discrimination from the Langley community as the cause. Democratic participation is integral to the creation of a vibrant, robust and free society, and when particular individuals feel that discrimination is forcing them out of the political sphere, it should be of grave concern to us all. Incidents such as this one demand that we work even harder at eliminating homophobia from every aspect of Canadian society: from our schools, our libraries, our legal system, our political campaigns, our minds and our hearts.

In this interview with Global BC, Policy Director Micheal Vonn discusses Hauptman’s resignation, and the ongoing battle against homophobia and discrimination across British Columbia, with Dara Parker from Qmunity and host Michael Eckford. 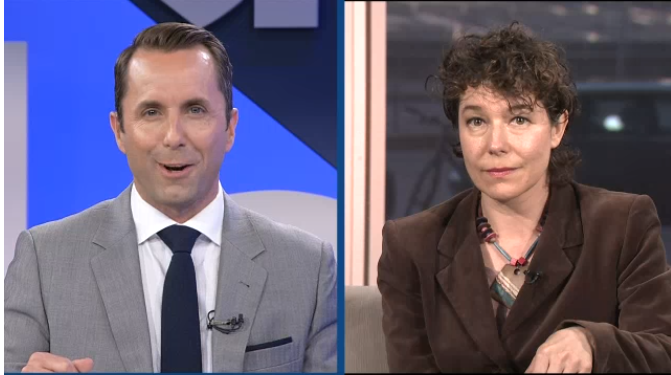 Previous Post: The Gazette Op-Ed: Where Are the Olympic Street Cams When We Need Them?
Next Post: Pickton lawsuit prompts Steven Point’s resignation from advisory board on inquiry recommendations