Today, BCCLA Senior Counsel Carmen Cheung appeared before the House of Commons Standing Committee on Public Safety and National Security to present the BCCLA’s position on Bill S-7. This bill seeks to resurrect the preventative detention and investigative hearing provisions from the 2001 Anti-terrorism Act, as well as create new criminal offences for leaving (or intending to leave) Canada to engage in “terrorism training”.

Readers with a memory for such things may be asking: “wait, didn’t you do this already?” And indeed we did, last February, with Bill C-17, which contained many of the same provisions as S-7. Bill C-17 died on paper when Parliament was dissolved, but its substantive provisions have returned in the form of S-7. But rather than repeat our submissions from last year – which discussed our serious concerns with preventative detention and investigative hearings – we focused our remarks today on our problems with the approaches to combatting terrorism reflected in this bill. 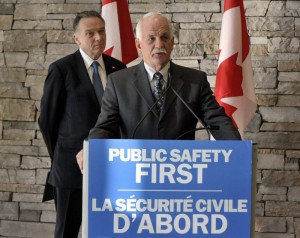 First, we pointed out that while this bill seeks to significantly expand government’s powers to detain and investigate based on ever-lowered thresholds of suspicion, there’s been no concomitant development of review and oversight mechanisms to ensure that these powers are being exercised appropriately. In fact, the oversight mechanisms proposed six years ago at the close of the Arar Inquiry have yet to be implemented. We urged the Committee to refrain from granting such extraordinary powers to the government until we have stronger and better accountability mechanisms in place.

Second, we discussed with the Committee our concerns that this bill reflects an approach to national security that focuses primarily on criminal sanctions without sufficient consideration of rehabilitation. Indeed, without proper attention to rehabilitation and reintegration of individuals engaged in – or caught up in – terrorist activities, we run the risk of perpetuating a cycle of marginalization, disenfranchisement and alienation, leading to further radicalization.

The BCCLA’s submissions from today are available here. The BCCLA also issued a statement today as part of a coalition of civil liberties and human rights organizations opposed to Bill S-7. You can find our submissions from last February, which discuss in substance our concerns about preventative detention and investigative hearings here.

Previous Post: Press Releases
Next Post: Silver Linings: The Supreme Court of Canada Rules on the Definition of Terrorist Activity