Today the MPCC is hearing testimony from Gabrielle Duschner, a key link between DFAIT and the Canadian Forces. Ms. Duschner worked for DFAIT as a political advisor to CEFCOM (the Canadian Expeditionary Forces Command), headquarters to Canadian military missions overseas.  This morning, she affirmed that there was a general awareness and concern about the treatment of prisoners in Afghan jails prior to April 2007. 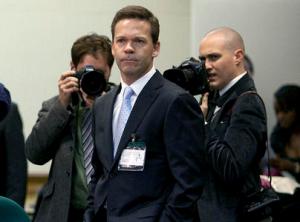 But the big story of the morning concerned several May 2007 CEFCOM memos, which had only been recently produced to the MPCC and were put into evidence this morning. As we’ve reported previously, Ms. Duschner was originally scheduled to appear before the MPCC two months ago.  Her testimony was delayed at the last minute after the DOJ informed the MPCC that the government had still had not disclosed documents relevant to her testimony.  Apparently, these documents included Canadian military memos calling for diplomat Richard Colvin’s dismissal or censure over the frank nature of his reporting on the risk of torture faced by transferred detainees. “Recent messages drafted by Mr. Colvin have illustrated a pattern of reporting that risks compromising Canada’s military and diplomatic position in Afghanistan,” one memo read.  According to another memo, “CEFCOM is concerned that [Colvin’s] continued employment in Kabul as a political counselor and deputy to the [Head of Mission] could become a liability to the government of Canada’s interests if left unchecked”.

One of the memos was drafted by Mike Carter, a subordinate of Ms. Duschner, who was employed by DFAIT but seconded to CEFCOM. Ms. Duschner had read the memo and recalled “some speculation among staff that [Colvin’s] tenure should come to a conclusion.”  Nonetheless, Ms. Duschner said that she disagreed with the report’s conclusions.

These memos show that not only was the Canadian military – and those in its very highest levels of command – aware of Mr. Colvin’s warnings, they were deliberately trying to silence them. Indeed, as one memo recommended:  “Mr. Colvin be engaged directly in DFAIT and reminded of his responsibilities as a diplomat and boundaries as a reporter”.

UPDATE  Some more items of interest from Ms. Duschner’s testimony yesterday.  Readers may recall that Richard Colvin had testified about an interagency meeting he had attended in Ottawa concerning the detainee issue.  Mr. Colvin informed both the MPCC and Parliament that he had told the group that if Canada was concerned about torture, they should stop transferring detainees to Afghan authorities.  According to Mr. Colvin, when he made that statement, the notetaker put down her pen and stopped taking notes altogether.  It turns out that this notetaker was Ms. Duschner, who informed the MPCC yesterday that she felt justified in putting down her pen because no one else in the room seemed interested in Mr. Colvin’s recommendation on how to stop torture.