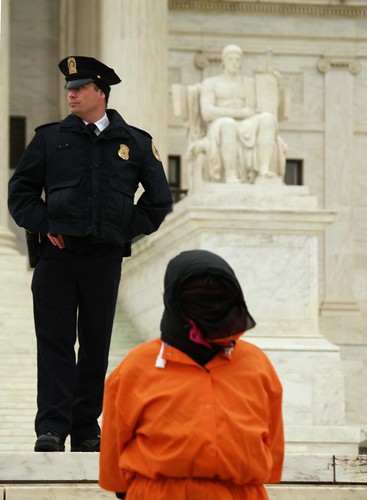 In an upcoming article in the March issue of Harper’s, Scott Horton reports on a possible (and ongoing) cover-up of the circumstances surrounding the death of three Guantanamo inmates in 2006.  According to Horton:

… new evidence now emerging may entangle Obama’s young administration with crimes that occurred during the Bush presidency, evidence that suggests the current administration failed to investigate seriously — and may even have continued — a cover-up of the possible homicides of three prisoners at Guantanamo in 2006.

Horton’s article — which relies in large part on interviews with camp guards present the night of the deaths and reports from Seton Hall University’s Center for Policy and Research (which, by the way, has done some impressive work reviewing and analyzing the government’s own documents to piece together the abuses and misconduct that has taken place in Guantanamo) — is a chilling account of death (likely) by torture, the government’s refusal to engage in a meaningful investigation of the deaths, and the possible existence of a black-ops site at Guantanamo itself.

Horton’s account of the Obama DOJ’s almost cursory dismissal of the evidence presented by the guards present on the night of the deaths is, of course, deeply troubling, and further exemplifies the serious lack of accountability and disregard of fundamental principles of the rule of law which continue to plague the entire Guantanamo regime.  Meanwhile, the federal government of Canada refuses to abide by a Federal Court order to seek the repatriation of Omar Khadr from Guantanamo, thereby abandoning one of its own citizens to — in the words of Horton — “an extra-constitutional prison camp.”

ETA Dahlia Lithwick over at Slate has some very interesting commentary on why Horton’s article isn’t getting coverage in the American press (and a fairly thorough summary of the contents of Horton’s article, though it really deserves a full read).

“Too Terrible To Be True?  Why aren’t we talking about the new accusations of murder at Gitmo?” (Slate)