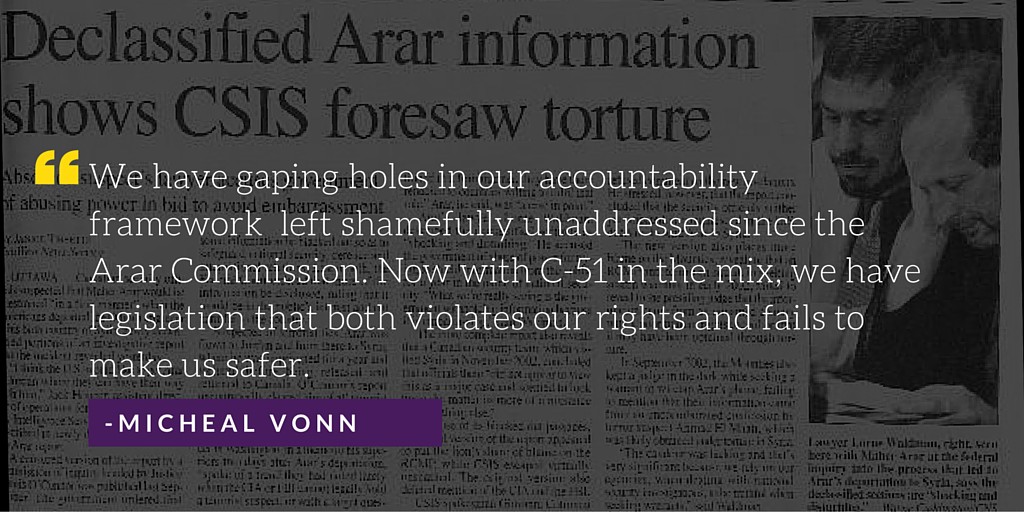 In response to overwhelming public pressure, the government of Canada has promised to review and revise elements of Bill C-51, the Anti-Terrorism Act 2015, and to engage in a public consultation on Canada’s national security oversight and accountability structures. The BCCLA and a coalition of civil society groups are speaking in concert to tell government that this opportunity must not be squandered.

The upcoming consultations offer a valuable opportunity to launch a reform process that will enhance the effectiveness of Canada’s national security laws and policies while also maximizing human rights protection.

Groups across the country are calling on Minister Goodale to take an approach that rejects the false dichotomy of rights or security. Towards that goal we offer the following Guiding Principles for the consultation process.

It is vitally important that the consultations and the eventual law reform not be limited to Bill C-51. While that legislation undeniably contains many serious shortcomings, there are numerous other laws, regulations and policies – many longstanding – that need attention as well. Many of these laws interact in complex ways. As such, all should be examined in a holistic manner.

Meaningful timing: before and after legislation is tabled

It would be unfortunate if the government were to proceed by way of drafting a Bill and then seeking expert and public input. Consultations then take on the character of political debate rather than thoughtful and constructive exchanges about broad principles and different options. Moreover, Members of Parliament do not have access to the legal opinions considering fundamental rights that preceded the tabling of the bill, and may be hampered in their ability to independently assess constitutional vulnerabilities. As such, we urge that consultations be carried out both in advance of legislation being drafted and then also through the conventional means of committee hearings once a Bill has been tabled.

National security reform in Canada over the years has, at best, approached Canada’s national and international human rights obligations as a secondary consideration and, at worst, has disregarded those obligations. That approach serves to reinforce the misguided and dangerous assumption that national security and human rights are contradictory, rather than mutually reinforcing, goals. This miscalculation in official policy has led to considerable, and avoidable, harm to members of vulnerable groups within Canadian society, such as non-citizens and minorities. Well-known examples of overbroad, discriminatory and unconstitutional action by security agencies has eroded the faith members of targeted communities could reasonably put in basic human rights protections. The Canadian Muslim community at-large has been harmed by a hostile social and political climate, produced to some measure by poor public policy and messaging around human rights and national security issues. This time we urge you to put human rights at the heart of the consultations and eventual reforms. One key premise should be that national security related recommendations that have been made to Canada by UN human rights experts and bodies will be implemented.

Any pressure to limit the reach or accelerate the timing of consultations to save money or simplify the process should be resisted. That was a particularly glaring shortcoming during the parliamentary reviews of Bill C-51. The opportunity to truly get it right with this set of reforms will be lost if the government does not draw on the impressive expertise and experience with respect to national security and human rights. It is particularly vital that the perspective of those communities most directly affected by counter-terrorism measures is heard.

Ensure transparency: be open to the public

National security is very often shrouded in secrecy, both with respect to individual cases and clarity around laws, policies and processes. But for national security to be truly effective, public understanding, confidence and support is essential. Canada has progressively entrenched a tendency for excessive secrecy with respect to national security matters, going beyond most of our allies. This consultation should be guided by a commitment to maximum possible access to information for the public. We further urge the government to be forthcoming about the potential Charter impacts of proposed legislation and transparent about their justifications for these impacts.

These consultations and subsequent law reform will proceed against a backdrop of several unresolved cases of individuals who have experienced serious human rights violations, often including torture, for which Canadian security agents have been directly or indirectly responsible. That responsibility has been documented and confirmed through court rulings and judicial inquiries. Yet in most of those cases there has been no redress or accountability. Ongoing failure to remedy these past injustices undermines any effort to demonstrate a new commitment to human rights in Canada’s approach to national security. Parallel to the upcoming consultations we urge the government to empower a judge or other independent and impartial expert to review cases involving national security-related human rights violations and make recommendations for resolution.

Past national security law reform has always suffered from a failure to properly evaluate existing laws, policies and resources and offer evidence as to gaps and needs. Consultations and proposals for reform will once again be undermined without information that properly analyzes what is already in place in Canada and carefully evaluates shortcomings to delineate whether what is needed is truly legal reform or whether it may instead relate to resources for proactive and preventative initiatives, training or improved systems.

A committee of parliamentarians with robust access to secret information, charged primarily with strategic issues, including an emphasis on “efficacy” review – that is, focusing on the overall efficiency and effectiveness of Canada’s [Security and Intelligence] community, laws and policies. In designing
this committee of parliamentarians, we must be attentive to three pivotal design aspects: good people; good resources; and good access to secret information.

a consolidated and enhanced expert review body – a “super-SIRC” – with robust access to secret information, capable of raising efficacy issues but charged primarily with “propriety” review – that is, focusing on whether the [Security and Intelligence] community comply with law, policy and
directives, and also empowered to hear complaints concerning [Security and Intelligence] community conduct.

Third, an independent monitor of national security law built on the UK and Australian model, with robust access to secret information and charged with expert analysis of Canada’s proposed or actual anti-terrorism and national security legislation.

Sign up below for updates on our work to repeal Bill C-51, and create an integrated framework for national security accountability.