Amy joined BCCLA in 2021 after graduating with a BA in Philosophy from Simon Fraser University. Her academic interests lie between jurisprudence, legal theories, and the intersectionality of law and philosophy. Before joining BCCLA, Amy worked at PIVOT as an urban researcher that focused on urban planning and youth engagement in civic education.

As an immigrant settler from South Korea, a country with a history of colonialism, she is passionate about contributing towards a future with a decolonization approach to property law known to “Canada”. She is a firm supporter of environmental ethics, and she is thankful to the Peoples of Kwikwetlem, səl̓ilwətaɁɬ təməxʷ (Tsleil-Waututh), S’ólh Téméxw (Stó:lō), Qayqayt , Stz’uminus, šxʷməθkʷəy̓əmaɁɬ təməxʷ (Musqueam), and Hul’qumi’num Treaty Group for allowing residency as an uninvited guest.

Darcie (she/her) joined the BCCLA as Operations Manager in July 2021. She is a uninvited settler on the unceded and ancestral land of the šxʷməθkʷəy̓əmaɁɬ təməxʷ (Musqueam), Sḵwx̱wú7mesh (Squamish) and Sel̓íl̓witulh (Tsleil-Waututh) people since 2016. She was born and raised on the territory of the Plains Cree, Cree, and Métis.

Prior to joining the BCCLA team, Darcie worked in the arts and cultural non-profit sector prioritizing equity, diversity, inclusion, and accessibility. She brings a diverse skill set in project management, programs, accounting, facility management, and even keeping the office plants alive. Darcie holds a Bachelor of Arts in Art and Design from the University of Alberta, and a Honours Post Graduate Diploma in Art History from the University of British Columbia. She is passionate about ceramics, cheese, and procedure manuals.

Greta joined the BCCLA as the Supporter Engagement and Development Manager in 2021. Prior to the BCCLA, Greta worked as the Communications and Development Coordinator at Megaphone Magazine and volunteered in grassroots organizations in the Downtown Eastside. Greta earned her BCom in Marketing at the UBC Sauder School of Business.

She is an immigrant from the city of Guangzhou in Mainland China, and has been calling the Coast Salish Territories home since 2013. Greta is passionate about social justice, good Chinese food, and takes great pleasure in spending time with her cat, Luna Beyonce Lin.

Jessica joined the BCCLA as Staff Counsel (Litigation) in 2019. Before joining the BCCLA, she was a lawyer at Arvay Finlay LLP and spent two years clerking for the Honorable Madam Justice Karakatsanis at the Supreme Court of Canada. Jessica is called to the bar of British Columbia and Quebec. She graduated from McGill University in 2015, receiving degrees in civil law and common law, with a minor in cognitive science.

Jessica has been involved in the social and environmental justice movement for many years, and previously worked for Ecojustice and the Public Interest Law Clinic. She is the former Editor-in-Chief of the McGill International Journal of Sustainable Development Law and Policy. In 2016, she was named one of Canada’s Top 25 Environmentalists Under 25.

Leila joined the BCCLA in 2020. She was born and raised in Mexico before becoming a settler in unceded Coast Salish territories. Leila has over seven years of experience in the not-for-profit Arts sector. Her background ranges from administrative support for small business to large event and project management. She has worked for the Coastal Jazz and Blues Society, the Vancouver Queer Film Festival, and the PuSh International Performing Arts Festival, where she served the human resources and financial operations with a lens in accessibility, inclusion, and system development. She is an avid reader of fiction and gender theory and is passionate about her involvement in social change.

Leila holds a Bachelor’s Degree in Philosophy from the University of British Columbia.

Mara Selanders (she/her) is a mixed-race Guyanese lawyer who was born and raised in Saskatchewan in Treaty 6 territory, which encompasses the ancestral lands of the Cree, Dene, Blackfoot, Saulteaux, Dakota, Nakota, and the homeland of the Métis nation. She completed her undergraduate degree in English literature at the University of Saskatchewan before moving to Ottawa to complete a Master of Journalism at Carleton University. After volunteering for a year in Sri Lanka, she moved to Vancouver to attend law school at the University of British Columbia. Mara is committed to community organizing and justice for racialized and oppressed people, and believes law can be a tool of empowerment and liberation.

Mara fills any free time she gets with yoga, cooking, watching basketball, and chasing after her dog, Bodie.

Meghan McDermott joined the BCCLA as staff counsel in March of 2017. With a B.A. in philosophy from Concordia University, her compassion and curiosity drove her to study law at the University of Victoria so that she could collaborate with others to pursue law reform in the interest of enhancing social justice. She has an LL.M. from the University of Edinburgh where her studies focused on whether parties to the United Nations Framework Convention on Climate Change have a responsibility to share the benefits of their forestry-related activities with local and Indigenous communities. Prior to joining the BCCLA she worked for many years as an advisor with the government of British Columbia, developing environmental and health policy and legislation. She has also provided legal services for the government of Ontario and interned as a legal analyst with the Dullah Omar Institute for Constitutional Law, Governance and Human Rights in South Africa.

When she isn’t working, Meghan can usually be found gardening or exploring the city with her dogs. She loves current affairs, arts and culture and volunteers as an executive with the board of Island Mountain Arts, a unique gallery and school of the arts in the Cariboo.

Sambriddhi Nepal is a fundraising and communications professional with almost a decade of experience in the non-profit sector. Prior to working at the BCCLA, she worked at WAVAW Rape Crisis Centre. Sambriddhi’s greatest professional joys come from creating content that inspire people to take action for something they believe in.

Sambriddhi is a settler on Coast Salish Territories. She was born in Nepal and lived in 6 different developing countries before immigrating to Canada in 2009. She is an avid reader, and hopes to add “Host of a Well-Attended Book Club” to her list of achievements in the future. 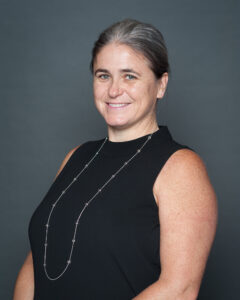 Living on the unceded territories of the xʷməθkʷəy̓əm (Musqueam), Skwxwú7mesh (Squamish), and səl̓ílwətaʔɬ (Tsleil-Waututh) Nations, Stephanie is a seasoned non-profit leader who brings more than twenty years of experience in social and environmental leadership and a deep commitment to justice to the BCCLA. She previously served as Executive Director for Out On Screen, which produces the award winning program Out In Schools and the Vancouver Queer Film Festival, and also served as interim Managing Director for Rainbow Refugee, a charity serving LGBT2Q+ refugees. She also served as Director and Campaign Lead for Greenpeace for ten years where she led conservation efforts in Canada’s forests and beyond. Stephanie is a white queer woman originally from Algonquin Anishinabe territory (Ottawa) whose family roots go back to Scotland, England, and France. She has been building a life with her partner Drew and their two clown-like dogs and if all goes well, will be playing ice hockey for the rest of her life.

Stephen Chin joined the BCCLA team as an articling student in October 2020. He has received degrees in science, commerce, and law from the University of Alberta. He credits his interdisciplinary education for affording him the opportunity to navigate the complex dimensions of leadership at the Peter Lougheed Leadership College, and for stoking his interest in climate change litigation at the National University of Singapore. Informed by his prior experiences at a small governmental commission and a university ombuds office, Stephen is attentive to the space where fairness, privacy, and institutional policies intersect and collide with community interests. He remains endlessly fascinated with emergent technologies, and is always on the lookout for surprising and thoughtful podcast episodes.

Veronica joined the BCCLA team in September 2019, after completing her JD at the University of Victoria. She was born and raised in Brantford, ON. Veronica comes from a strong line of Kanyen’kehá:ka (Mohawk) women and is a member of the Six Nations of the Grand River. Not a day goes by that she does not reflect and give thanks for the immense privilege and responsibility to live as an uninvited visitor on the unceded homelands of the xʷməθkʷəy̓əm, Skwxwú7mesh & səlil̓wətaʔɬ.

At UVic, Veronica was an active member of the Indigenous Law Students Association (ILSA), a co-op student at the Indigenous Law Research Unit (ILRU), and a participant in ĆELÁṈENEȽ: A Field Course in the Re-emergence of W̱SÁNEĆ Law. Veronica also received three peer nominated awards for her efforts to foster good relations and strengthen connections to community beyond the Faculty of Law.

Prior to law school, Veronica completed a MA from the Department of Criminology and Criminal Justice Policy at the University of Guelph. During the course of her graduate studies, she researched the over-incarceration of Indigenous peoples in Canada, the effect of s. 718.2(e) of the Criminal Code, and the advent of specialized courts, specifically, Gladue and Indigenous courts. Veronica also worked for a number of years as a victims’ rights support worker with Victim Services of Brant and the Ministry of the Attorney General, Victim Witness Assistance Program. She also worked as a criminal courtroom clerk.

Zoe (she/they) is a settler raised and currently living on the stolen lands of the xʷməθkʷəy̓əm (Musqueam), Skwxwú7mesh (Squamish), S’ólh Téméxw (Stó:lō), Kwikwetlem, and səl̓ílwətaʔɬ (Tsleil-Waututh) peoples. Zoe works hard to undo many of the colonial understandings she has internalized while living in a colonial state. This drives their desire to understand the power of narrative and its intersections with power and oppression, particularly within the legal field. Zoe appreciates all the support she has received in her community that brought her along in her social understanding. Zoe received their BA from the University of British Columbia in History and Philosophy. In her spare time Zoe loves to garden and take long walks.