In our previous blog, we unpacked part of the public dialogue that has been taking place in Vancouver on street checks. In this blog, we wanted to detail some of the legal dimensions of what is and what is not a street check.

What is important to remember is that there is a legal ‘balancing act’ when it comes to encounters with police. On one hand, you have fundamental rights and freedoms under the Canadian constitution. On the other hand, police have been granted broad powers by legislators and the courts. We’ll break down key aspects of this ‘balancing act’, and highlight how to know your rights if you are stopped by police.

Where do the Police Get their Powers?

In any conversation about policing policies and practices, it is important to understand where police get their powers. In British Columbia, police powers come from the Police Act[1] and the common law (i.e. court cases). For the most part, police powers in Canada have evolved and expanded through precedents in the common law rather than through legislative changes.

Police officers apply these powers through the exercise of discretion. Discretion is exercised in the context of street checks, vehicle check stops, investigative detentions, and arrests. While it is important for police to have discretion in their practices, such as discretion to arrest or not arrest, some scholars have commented that it is in the exercise of discretion where bias is prone. Police “inevitably have the opportunity to apply their personal values and beliefs through the discretion”[3] exercised in these types of interactions. Police officers “frequently rely upon intuitive assessments if a particular individual seems ‘out of place’ or ‘suspicious’”.[4] There is “mounting evidence”[5] that these discretionary decisions by Canadian police are influenced by factors such as an individual’s race or socioeconomic status. These subjectively‑based assessments can “too easily mask discriminatory conduct.”[6]

As stated above, there are several different types of police stops, and each one triggers different constitutional rights under the Charter of Rights and Freedoms (the “Charter”). One of the problems in discussing people’s rights with respect to street checks is that people use that term to mean different things.  In this blog, we will break down what street checks and investigative detentions are, and highlight the key differences between these two types of policing.

What is a Street Check?

Typically a “street check” or “police stop” is a practice where police stop a person in public, question them, and record their personal information in a police database. A vehicle check stop is not a street check. Police have the legal authority to conduct vehicle check stops and to require the driver to produce a licence, certificate of ownership, and proof of insurance. In addition, police have the legal authority to question a driver about the mechanical condition of the vehicle.[7] If you are stopped by police while driving a vehicle, you must provide police with your ID. Passengers in your vehicle are not required to identify themselves to police.

One of the questions we are asked about street checks is, “Does a street check violate my constitutional rights?” The answer to this question is a bit complicated, but we will try to answer it below.

In the context of interactions with police, there are four (4) key constitutional rights at play: 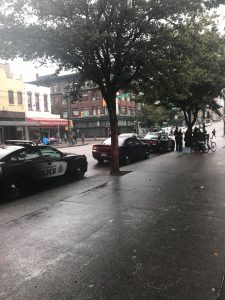 In the context of a street check, there are two competing interests. On one hand, a person’s right to liberty provides that they have the right to “do as they please”, absent a law to the contrary.[9] On the other hand, police have powers under the common law to investigate crime and keep the peace, which may include the practice of stopping and questioning a person on the street (i.e. a street check). However, this power is limited.

There is an important distinction between a street check and a “detention” under sections 9 and 10 of the Charter. A street check is not necessarily a “detention” under the Charter. The Supreme Court of Canada ruled that police cannot be said to “detain” every time an officer stops a person for purposes of identification or questioning. While a person who is stopped by police will be “detained” (i.e. “delayed” or “kept waiting”), their constitutional rights under sections 9 and 10 will not be engaged by a stop that involves “no significant physical or psychological restraint.”[11] Simply put, a street check that involves no significant physical or psychological restraint will not violate a person’s constitutional rights.

What to do if you are Street Checked?

Here are some practical “tips” if you are street checked:

What is an Investigative Detention?

Detention under sections 9 and 10 of the Charter refers to circumstances where police curtail a person’s liberty by a significant physical or psychological restraint. If, for example, a police officer physically blocks you walking away, that is a physical restriction and you are being physically detained. For psychological detention, there may be no physical restriction on your movement, but the way that the officer is acting would lead a reasonable person to understand that that have no choice but to do what the officer says.

For a detention to be lawful (i.e. not “arbitrary”), a police officer must have reasonable ground to suspect that there is “a clear nexus [i.e. connection] between the individual to be detained and a recent or on‑going criminal offence.”[12] Police have no legal authority to detain a person based on a hunch or because that person looks “suspicious”. Plus, it is not proper grounds for detention that a person is simply in a so-called “high crime area.”[13]

If you feel you are being detained by police, remember your right to silence. This is an important thing to remember. You can say, “I want to remain silent.” If you physically resist the police, you may be subject to charges such as obstruction or assault.

If, based on the circumstances of the police interaction, it turns out that you are (or have been) under investigative detention, you have the following rights under Sections 10(a) and (b) of the Charter:

With these rights in mind, stay tuned for our third blog next week on what a provincial policy addressing street checks could look like.