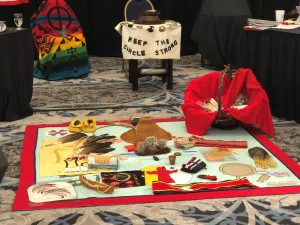 This June, BCCLA Policy Director, Micheal Vonn, and I participated in the National Inquiry into Missing and Murdered Indigenous Women and Girls, in Regina, Saskatchewan.[1] Families of missing and murdered Indigenous women and girls, and the MMIWG Coalition (of which the BCCLA is a member) have highlighted their disappointment with the deeply flawed Inquiry process.[2] With that in mind, I wanted to share some thoughts about our experience in Regina while at the Institutional Hearings on Police Policy and Practices.

Our participation at the hearings was grounded in collaboration with friends and allies.  We were one of more than forty parties in attendance and we worked alongside Indigenous and women’s organizations, both big and small, from across the country.  It was an honour to form and strengthen alliances with these groups, which was essential for sharing knowledge and ensuring that key issues that were otherwise neglected were raised in cross examination.

Another key development was the apology from RCMP Commissioner Brenda Lucki to the families and communities of the missing and murdered women and girls.  At the beginning of her testimony, Commissioner Lucki said “on behalf of myself and my organization, I am truly sorry for the loss of your loved ones and for the pain this has caused you, your families, and your communities. I’m sorry that for too many of you, the RCMP was not the police service you needed it to be during this terrible time in your life.” Some attendees were hopeful that the apology marked a shift in relations between the RCMP and families of missing and murdered Indigenous women and girls.

In our cross examination of Investigative Policies and Practices panel witnesses, we explored possible gaps between policy and actual on the ground practice.  For instance, we examined what recourse a family or community member has if they are concerned that police are not following policy, and whether they would even be able to detect that proper procedures are not being adhered to.

In asking Commissioner Lucki how the RCMP’s bias-free policing policy is evaluated, we learned that there is no systemic data collection to evaluate whether the policy is achieving its goal of providing equitable policing services for all people.  Commissioner Lucki said that the RCMP should consult with Indigenous communities about whether ethnicity or race should be recorded in RCMP forms in order to properly measure the impacts of bias-free policy.

In collaboration with the MMIWG Coalition we are continuing to monitor the progress of the Inquiry. Recently, the National Inquiry announced that more expert or institutional hearings will take place between September and the end of the year.  We are waiting to find out more details about the hearings before deciding if we’ll participate, so stay tuned in the coming months.

To learn more about the proceedings, watch recordings of the hearings here.

[1] I can briefly describe how these hearings work, as it isn’t a familiar process for many of us.  The hearings we participated in featured three panels of witnesses over five days.  The witnesses represented a variety of policing institutions, including the RCMP, the OPP and Sûreté du Québec. Each panel had a specific theme and featured witnesses that were called upon to give evidence.  Each witness on the panel has a lawyer beside them who asks them questions for 40 minutes, which allows the witness to provide information as “evidence” to the four Commissioners. After all the witnesses have given their testimony and entered materials such a institutional policies as “exhibits” on the public record, parties with standing, such as the BCCLA, have a specific amount of time to cross-examine the witnesses. At the police hearings there were over 40 parties with standing which means that each party was allotted roughly 10 minutes to cross-examine any or all witnesses on the panel.  After the parties have finished their cross-examinations, the witnesses are re-examined by their lawyers before the Commissioners have an opportunity to ask each panelist any questions.