The B.C. Court of Appeal has upheld the constitutionality of automatic penalties under B.C.’s drinking and driving law.

The B.C. Civil Liberties Association had argued in court that automatic penalties under the drinking and driving law without a court process violated the right to be presumed innocent until proven guilty.

But on Monday the B.C. Court of Appeal ruled the legislation does not replace the Criminal Code or lead to criminal punishment.

“The legislation’s purpose and effect is to regulate highways and enhance public safety,” the court wrote.

Markita Kaulius, who lost her 22-year-old daughter Kassandra to a drunk driver nearly three years ago, says it’s the right decision, but the law still needs to be tougher. 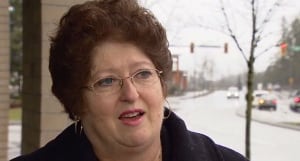 Markita Kaulius, who lost her 22-year-old daughter to a drunk drive nearly three years ago, says she’s happy the courts have upheld B.C.’s new drinking driving laws, but she says the law still need to be tougher. (CBC)

“I have a bedroom down the end of the hall where I look every morning where my daughter’s supposed to be and she can’t come home because somebody made the choice to drink and drive,” said Kaulius.

“Four more people will die today from impaired driving in Canada. No family should ever have to go through a loss like this.”

“We’ve led the way nationally on tackling this issue and the results speak for themselves — 190 lives saved and a 52 per cent reduction in alcohol-related motor vehicle fatalities. Our ground-breaking legislation both deters people from drinking and driving and allows police to immediately remove those drivers who are affected by alcohol from our roads,” said the statement.

But BCCLA lawyer Raji Mangat disagreed with the court’s ruling, saying the law does have penal consequences.

“In our view, it’s unfortunate because we do see that there are very true penal consequences to this regime, and it effectively does make for people to be presumed guilty until they can go to the Office of the Superintendent of Motor Vehicles and attempt to prove themselves innocent of something.”

When the law was first introduced by the provincial government in 2010, a driver who blew a “warn” or a “fail” on a roadside screening device faced automatic penalties.

They included a driving ban, seizure of the vehicle, and fines and fees for storage, towing, and getting the driver’s license returned.

In 2011, the B.C. Supreme Court found that the law was unconstitutional for drivers blowing a “fail” because there is no way for drivers to properly challenge the roadside breath test.

The government changed the law the following year requiring police to tell drivers they can ask for a second test on a different machine, and that they can ask for a review of the test through the Office of the Superintendent of Motor Vehicles.

The B.C.Court of Appeal has now ruled the law will stand.

Last week, the B.C. government released statistics showing drinking driving deaths had been cut in half, saving nearly 200 lives since the law came into effect in 2010.