The BCCLA is again calling for an independent investigation after allegations against Williams Lake RCMP by local indigenous family. The mother of 17-year-old Jamie Haller says that her daughter was punched in the face by a local RCMP constable while handcuffed in the back of a police car after her daughter had called local RCMP for assistance. The incident happened on September 10th, 2011.

“I saw Jamie on the ground, crying and handcuffed,” says Haller’s mother, Martina Jeff. “I got out and ran towards her. She was having a panic attack. She is very small and has never been in trouble with police before.” Jeff goes on to explain that she was forbidden contact with her daughter who was then loaded into a police car. Once in the car, her daughter began kicking on the windows and yelling “Mom!”

“I heard one [officer] say, ‘keep kicking and you’ll see what happens. . .’ He put his whole upper body in the car and started punching…When I looked in the car I saw my daughter. Her face started swelling really bad. There was blood coming down on each side of her mouth. She was handcuffed, with her hands behind her back.”

The BCCLA is calling for an immediate and independent investigation of this incident by, at a minimum, a senior officer from outside the Williams Lake RCMP detachment.

“The community needs confidence that these serious allegations will be investigated fully, promptly and as impartially as possible under our current system. If wrongs were committed, the public wants to know that they will be dealt with in accordance with the law – whether those involved are employed as law enforcement officers or are members of the public,” said Robert Holmes, Q.C., President of the BCCLA. “The community needs to trust that when someone calls 911 for the police, they will be treated with respect and not end up in hospital because of injuries sustained due to police actions.”

Jamie Haller was released the next morning without charge, and without having received any medical attention. She reports that she was unable to work at her job at a fast food outlet given the appearance of the bruising on her face, and had to take a week off of school due to injuries to her eye that affected her vision. 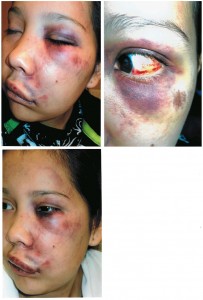 Click here to see the letter to the CPC